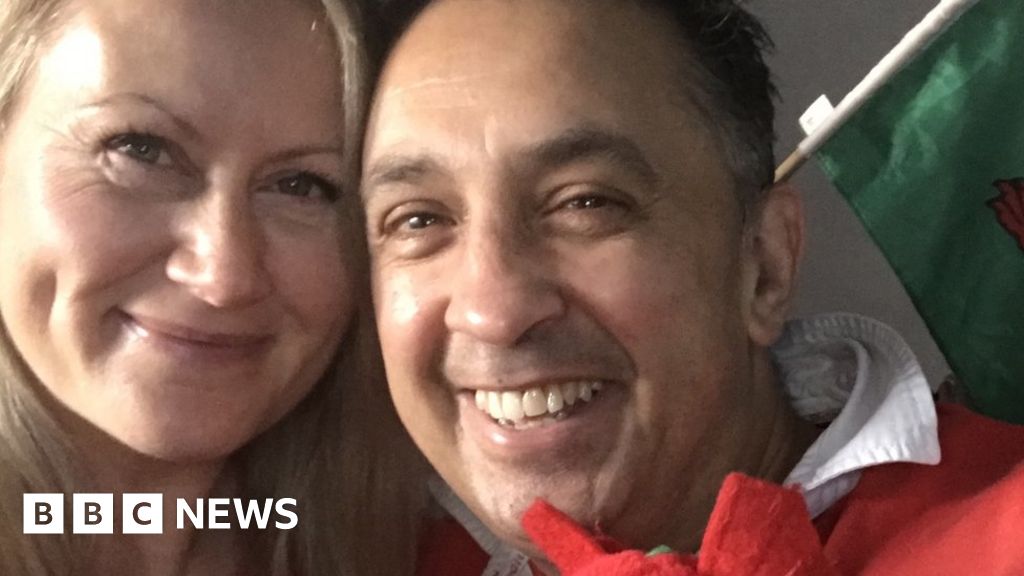 In April 2020, Sue Martin told the BBC how her husband Mal had contracted Covid-19 and his chances of survival were almost zero. Nearly three months on Sue, 49, a civil servant from south Wales, tells Ceri Jackson what has happened since and the impact of an unexpected public reaction to her family’s heartache.

I bumped into two friends in the supermarket yesterday. They asked me the same question I’ve been asked literally thousands and thousands of times over the past few months: “How’s Mal doing?”

It was exactly three months to the day that my husband was taken to hospital by ambulance from our family home gravely ill with Covid-19; three months since our two children and I video messaged him to tell him we loved before he was put in an induced coma and placed on a ventilator; just under three months since doctors told me Mal’s chances of survival were virtually zero.

One friend said tearfully: “I can’t quite believe you’re telling me this” but the answer I’d given her was true.

Against all odds maybe – Mal is possibly coming home this week.

When I gave an interview to the BBC shortly after Mal was hospitalised I didn’t think too much of it. We were consumed with the pain of what had happened and what was to come and, in the early stages of lockdown, trying to get through each day without physical contact with our family and friends.

The public reaction to the interview was as unexpected as it was incredible. I was sent thousands upon thousands of messages and letters of love and support from people I’d never met, people from all over the world who’d been moved by Mal’s story.

And those messages haven’t stopped. So, for all those who’ve been asking, I’m finally in a position to give a meaningful update.

At the time I gave the interview, the children and I had been allowed to visit Mal’s bedside for a few minutes. Covered from head to toe in PPE we said our goodbyes to him. We’d been told he would likely die the following day.

When the dreaded call from the consultant came the next day, he told us there had been a tiny improvement which meant a drug supporting Mal’s blood pressure could be reduced; not enough to raise too much hope but a glimmer nonetheless.

For the next few weeks it was touch and go. Medics worked at simply keeping Mal alive, giving his body a change of fighting the virus.

For six weeks we existed in a sickening limbo and nightmarish rollercoaster ride. Mal remained critical with a much greater chance of him dying than pulling through.

Eventually Mal tested negative for covid but his body had been ravaged by the virus and profoundly weak. The roller-coaster ride continued.

Very slowly, painfully slowly, doctors began trying to wean Mal off the ventilator. He’d already had a tracheotomy in preparation for bringing him out of sedation but with acute kidney failure he had been on a kidney filter from the start.

Unable to expel strong sedatives from his system he seemed to take forever to wake up with additional complications like recurrent infections along the way.

When Mal eventually woke up he was so weak he could only respond by blinking.

The very first time we FaceTimed him was horrific. He was lying there, lifeless. His eyes were open but he wasn’t really seeing. Had all this taken its toll on his brain? Neurological damage had always been a possibility and still he was only given maybe a 10 to 20% chance he’ll pull through.

I remember being in tears on one phone call to him (obviously a one way conversation) when a nurse said Mal had mouthed the word ‘bye’ to us.

It was at that point that they suggested we try FaceTime again and he mouthed “I love you, I want to come home”.

Just as we’d been warned, things did move at an agonisingly slow pace. Mal’s muscle had wasted away to nothing. They’d reduce his ventilator settings to enable him to breath on his own for half an hour but the following day he’d be exhausted.

The next time they’d reduce support for an hour and so on… Gradually he’d build up enough strength to wiggle his finger, then manage a wave goodbye, then lift his arm. But even then, we were once again constantly warned “he’s not out of the woods

They’d put a speech valve on the tracheotomy and we heard “hiya, how are you?” We thought it was a nurse speaking at first as the phone was obscuring Mal’s mouth.

Then I suddenly said “Mal, is that you?” and he replied “yeah, you alright?”

They’d warned us that it might not sound like him but it did. It sounded exactly like him! He made a joke, something about the bed baths being good.

It was starting to sound like him, starting to look like him, it is him, he’s in there, he’s come back to us! That was the first bit of light in a very dark time. Tears again but this time, for the first time, they were happy.

As Mal began to be able to communicate more, it seemed to do wonders for his mental positivity and after a second bout of pneumonia and over a litre of fluid drained from his lung he made more rapid improvement.

He was on the ventilator for an agonising 61 days but even then caught pneumonia for a third time and had to stay in ICU for 80 days.

But even after leaving ICU he was scared of falling asleep, fearing he wouldn’t wake up and he asked me “am I really going to make it?”.

I said to him: “Mal, the consultants always gave me the worst case scenario. When the consultant said to me that you are a long way from the danger zone, I believe him. You are out of that critical phase now and you are in recovery.”

Yesterday he walked up and down two flights of stairs unaided. He’s getting stronger every day, so much so the physios say he no longer needs their help, not even a care package when he comes home. He has astounded them with his determination

His wish now is to be able to walk to the side of the pitch and watch our 14-year-old son Wiliam play rugby. Given the fact they probably won’t be back playing until next year, knowing Mal he’ll probably be back helping them train by then.

Mal will have to have surgery to amputate part of both his thumbs, his index finger and the tip of his middle finger of his right hand due to lack of blood circulation.

But that’s a small price to pay and he was never any good at texting anyway so he’ll just have to use voice control from now on.

There’s a chance he’ll require long-term kidney dialysis but things on that score have also improved. Monitoring will continue but consultants are reasonably confident that won’t be the case.

His lungs will remain scarred and we’re told he might suffer from breathlessness but he doesn’t require oxygen.

Like his kidneys, his lungs might not recover fully but they may recover enough. Whether he’ll be able to run Parkruns like he used to or whether he’ll have to walk Parkruns in the future, we don’t know.

But I do know that whatever happens Mal will make sure he is the strongest possible version of himself.

There will be an emotional, psychological fall-out for sure. We’ve all got a lot to process. But if we need support to help us through then we’ll take it.

I’ve always considered myself a strong person. As a family we’ve had many tragedies, as so many people have, but we’ve always been able to get through it together.

But this has really tested me and made me realise that you don’t need to be strong all the time. There are times in your life when you do need help and you shouldn’t be afraid to take it.

For the incredible support we’ve had from family and friends, medical staff and our community, I haven’t been able to say thank you in person.

Our close family, friends, work colleagues and neighbours have been incredible. I cannot express my gratitude enough for the care Mal has received. In particular the ICU team who treated him like he was one of their own and made an horrendous situation more bearable in what extreme circumstances for them.

And we are so, so sad for the families who did lose their loved ones to Covid, we send them lots of love and our deepest sympathies.

But throughout this ordeal support has also come from another, totally unexpected source.

So what I’d really like to say is thank you to the thousands of people, complete strangers not only from the UK, but Australia, Spain, Sweden, South Africa, New Zealand, around the world, who wrote to me, messaged me, left comments on social media, and others who held us in their thoughts for a moment.

I can’t describe what a comfort and help that was.

All the medical staff say Mal was so close to death that his recovery can only be described as miraculous.

We’re not a religious family but it seemed that the world was praying for us. And maybe that played a part in the story of ‘Miracle Mal’ as he from now on will forever be known.