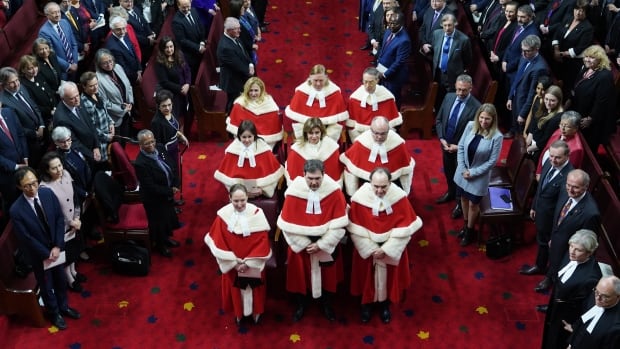 Favel, originally from the Poundmaker Cree Nation, is the only Indigenous judge on the Federal Court and just the second in Canadian history (Justice Leonard Mandamin, from Wikwemikong Unceded Indian Reserve in Ontario, retired last year). He said he thinks the Canadian judiciary is slowly getting more diverse — but the federal government’s commitment to building on that diversity needs “aggressive timelines” to succeed.

“It’s going to take some patience, but patience doesn’t mean waiting another 50 to 100 years,” said Favel, who was appointed to the bench in 2017 by then-attorney general Jody Wilson-Raybould.

Despite the Trudeau government’s promise to appoint a more diverse bench, change has been slow. Since 2016, only three per cent of federal judicial appointments have self-identified as Indigenous and eight per cent have identified as visible minorities, according to the Office of the Commissioner for Federal Judicial Affairs.

Justice Minister and Attorney General David Lametti insists the government is working to close the gap.

Since the beginning of the Trudeau government’s second mandate, approximately 55 per cent of all federally appointed judges have been women, 20 per cent have been racialized Canadians and two per cent have been Indigenous, according to the commissioner’s office.

“We have outstanding candidates that we are appointing across Canada, who happen to be diverse,” Lametti said.

“But the key is getting really good, exceptional individuals who happen to be diverse to apply, and then that allows us to build a better bench — a bench that reflects Canadians.”

Over the last year, 320 people applied for federally appointed judicial roles, according to statistics made public by the Office of the Commissioner for Federal Judicial Affairs. Of those, 150 self-identified as women, 15 as Indigenous, 45 as visible minorities and 19 as LGBTQ2.

“There is a need for qualified people of all backgrounds, of all genders, of all sexual preferences, of all racial and ethnic groups, to make their applications,” said John Stefaniuk, chairperson of the Judicial Issues Subcommittee and an incoming member of the board of directors for the Canadian Bar Association.

“It’s a little bit onerous, but not incredibly onerous, to go through that process, and that’s the only way we’re going to get that representation.”

Candidates for judicial appointments need at least 10 years of experience at the bar and must go through a lengthy application process that can take two years.

Some say the application requirements need to change.

Jean Teillet, a lawyer, writer and great-grandniece of Louis Riel, said the appointments process is skewed toward a specific type of personality and favours apolitical people.

“You’re always looking for the person who will conform to that pre-existing concept of what a judge is,” Teillet said.

“I personally think we should be examining what [the process] judges in order to get real diversity on the bench.”

Teillet said the problem struck her when she was watching a play in Regina a few years ago about the trial of her great grand-uncle.

“Those judges from 1885 could have been, with almost no change, in our courtroom today,” Teillet said.

“What it shows you is that our judicial system is locked in stasis … I think we’re long overdue for a wholesale re-evaluation of the entire system.”

No Indigenous judge has ever served on the Supreme Court of Canada. The high court has seen some diversity improvements at the clerk level, where 22 per cent self-identify as visible minority and three per cent as Indigenous.

The bilingualism requirement has been cited by many as presenting an obstacle to the appointment of Indigenous justices to the Supreme Court.

Teillet said the ability to speak Indigenous languages should be evaluated on a par with proficiency in French.

“The fact that you don’t speak French shouldn’t always be seen as a barrier to being on the Supreme Court of Canada,” Teillet said.

“Anything that sets a rigid rule all the way across the line, that everybody has to meet this marker, means that you are disqualifying perhaps hundreds of really qualified people who could be sitting on the Supreme Court of Canada, who could bring much more diversity.”

The Canadian Bar Association does not believe a candidate’s inability to communicate in both official languages should always be a disqualifying factor, said Stefaniuk.

“I think the expectation would be that an individual appointed who was not bilingual would take efforts to improve their facility in the other official language,” Stefaniuk said.

“Bilingualism is an important aspect in the evaluation of a candidate’s merit … as is the representation of that applicant in terms of the diversity of Canada.”

But Lametti, who was once a Supreme Court clerk himself, said he is not open to waiving the bilingualism requirement.

“It is absolutely necessary that a judge … on the Supreme Court of Canada be able to understand those words.”

Still, Lametti said he hopes to see an Indigenous justice on the Supreme Court of Canada soon.

“I don’t think that day is far off,” Lametti said.

Lametti is not considering any changes to the application process for judges either. He said he is encouraging younger lawyers to participate in the judicial appointment committee so they can help to interpret the criteria.

“I think by and large that system’s working, is beginning to work very well right now,” Lametti said.

“I’m inclined to let it run and keep an eye on the results.”

Indigenous perspectives on the law

Beverly Jacobs, the new associate dean of the University of Windsor Faculty of Law, said merely appointing a more diverse bench won’t be good enough if the laws themselves don’t change.

“it just means that it becomes a brown system with the same colonial laws so it’s not going to work,” Jacobs said.

Jacobs said she believes the justice system needs to incorporate more Indigenous perspectives in law. She said the existing system ignores the fact that Indigenous nations had their own laws prior to European contact.

“There’s still what I call a process that has never been designed based on Indigenous principles,” she said.

“We didn’t have jails, we didn’t have policing. We had processes that identified wrongdoing. I’m not saying that conflict never occurred, but what I’m saying is that there was a process to identify conflicts immediately and it was community-based, it wasn’t individual.”

Jacobs, who is from Six Nations, an Iroquois community near Hamilton, said the racism she faced while attending law school at the University of Windsor almost drove her away from a legal career. Now, she is in a position to influence the way law is taught at the same school.

“What motivates me is when I … see light bulbs go on,” said Jacobs. “When I see students who really understand … it totally shifts their way of thinking.”

Favel said he’s seen gradual improvements in the profession and hopes it continues.

When he joined a Saskatoon law firm fresh out of law school, Favel was the only First Nation lawyer in the office. By the time he left the firm to sit on the federal bench, he was working alongside four other First Nation individuals.

Favel said change builds on itself until eventually it spreads throughout the system.