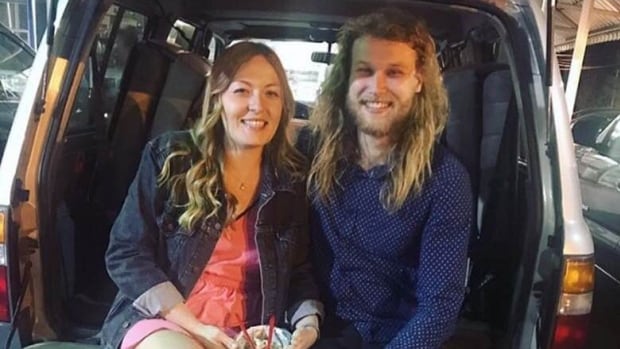 For three years after his daughter’s death, Ed Grennan couldn’t look at her picture or visit her grave. More than two decades later, he thought he had healed.

But after the Northern B.C. murders last summer and his attempts over the past year to assure victim Chynna Deese’s mother, Sheila, that there are Canadians who care and remember, the Whitehorse truck driver has often found those old emotions resurfacing.

Grennan set up a makeshift memorial with flags and flowers in the weeks after the murders. In the months that followed, he and others planted solid posts in the ground and built a white-painted wooden lean-to on the lonely stretch of Alaska Highway where Deese and her boyfriend, Lucas Fowler, died last July.

Flags, handwritten notes of love, crosses and wreaths sit alongside pictures of the smiling couple.

“It’s a beautiful area. I feel all the badness has gone out of there. There’s nothing but love and goodness there now and — I guess — sorrow,” he said.

A movie she wouldn’t watch

Deese and Fowler were killed sometime between July 14 and 15, 2019 near Liard Hot Springs in Northern B.C. by two young men who then murdered University of B.C. lecturer Leonard Dyck four days later and 500 kilometres away.

The largest manhunt in Canadian history followed, and the world watched, rapt, as police and the military sought suspects Kam McLeod and Bryer Schmegelsky. Their bodies were discovered three weeks later on the remote Northern Manitoba riverbank where they died by suicide.

Deese, 24, was from North Carolina and Fowler, 23, was Australian. They were in love, driving through Canada’s magnificent wilderness when their old, blue Chevy van broke down.

As the anniversary of the murders nears, Sheila Deese said from her Charlotte, N.C., home that she feels like she’s been living in a movie for the past twelve months.

Not a movie she would watch. And not one she auditioned for.

But she’s grateful to people like Grennan who have tried to show her she’s not alone.

She contacted him after reading a CBC story about his first makeshift memorial, which consisted of Australian and American flags alongside a floral cross.

“We have talked so much over the past year,” Deese said. “He said he knew how I felt.”

As well as setting up the memorial, she said Grennan has sent her cards throughout the year. “Over 100 truckers had signed them.”

‘Every day is a memory’

In some ways, Deese said, she wishes she could just skip July. Instead of one specific date to remember, she has a whole month to deal with.

She last saw her daughter on July 6. That’s when Deese took Chynna to the airport, her suitcase bulging with the giant work boots she’d ordered for Lucas. They took up half her luggage and she briefly considered wearing them. Deese told her that would be crazy.

Mother and daughter had their last phone conversation and text message on July 13. Her calendar had July 31st circled — the date Chynna was supposed to come back. Instead, police knocked on Deese’s door late on the night of July 17.

“We had her memorial July 27th, not knowing who had killed them,” Deese said.

“Every day is a memory.”

Grennan’s memories are more than two decades old. But they still hurt.

Like Deese, Grennan had to cope with the unexpected loss of a youngest child when his 17-year-old daughter, Mary-Anne, died of botulism poisoning in April 1996.

He also knows what it’s like to be in the media spotlight.

After his daughter died, Grennan filed a malpractice lawsuit against the doctor who treated her. The case made national headlines and dragged through the courts for years. Grennan ultimately lost at the appeal stage.

“It’s deep rooted. It doesn’t take much to bring it out,” Grennan said by cellphone, on the road near Watson Lake, 200 km northwest of the site where the murders happened.

“A lot of times, just driving by a spot where I camped with my daughter, I have to pull over to the side of the road and lose it again for a while.

“Just when you think you’re doing good, something will trigger it again. That’s what’s going to happen to Sheila.”

Deese, who has a life coaching certification, is used to working to help others solve their problems, but said she’s found no resolve for what happened to her own family.

She said the publicity surrounding the murders meant strangers were asking questions about details of the case in a way she found shocking.

She said that “because it was so public and people followed it, they felt a part of it, and they felt entitled to know everything.

“And they try to say that at least you have other children.”

Chynna was the youngest of four siblings who were all very close.

Deese said the whole family has been acutely impacted by the threat of COVID-19, which has spiked in the United States in recent months, killing more than 130,000 people. The pandemic has filled the headlines with tragedy, much the same way the Northern B.C. killings did this time last year.

“The thoughts of us losing a family member or someone close to us is more extreme for us,” she said. “We get panicked.”

Deese got a job in recent months as an account representative for her local blood bank, meeting with local businesses to organize blood drives. She said she wears a mask all the time: outdoors, at the grocery store, on the job.

“That’s a visible mask,” she said. “But I have to wear an invisible mask every day. I feel like I’m always wearing a mask because people want you to be OK. And I try not to be sad.”

‘One day, I want to come to Canada’

Thousands of people drive the Alaska Highway every year. It’s a ribbon of road that connects provinces, nations and — by extension — the lives of thousands of drivers. Some are there for business, some for pleasure, some out of necessity.

The last images of Chynna Deese and Lucas Fowler were taken by the side of the road. A still from a gas station video caught the couple hugging, happy, in love for all the world to see.

Grennan said he’s not sure why the memorial to the two young adventurers has touched so many, but he believes most people have had a loss in their lives.

“I’ve seen truck drivers hold on to their wives and they both are sobbing,” he said.

Deese credits her faith for helping her keep thing together and said she and Grennan have spoken about the possibility of her coming to visit the memorial in person.

But even before the pandemic made cross-border travel an impossibility, she knew she wasn’t ready.

Grennan plans to visit the site on the anniversary with a wreath for both families.

One day, Deese says she’ll join him. But not yet.

“I feel like one day I want to come to Canada. There’s so many people that are like ‘We just want to hug you and love on you,’ ” she said.

“I want to see what she saw. I just don’t know when that will be though.”