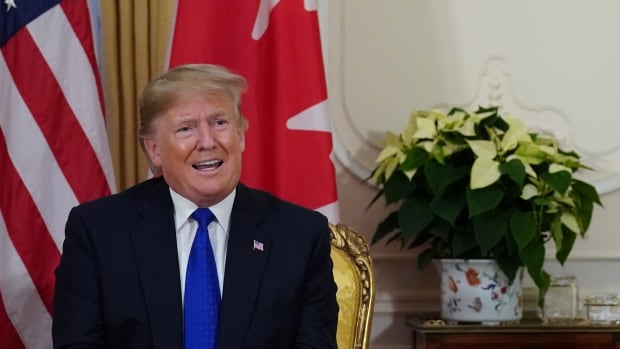 Canadians are flooding a foreign chapter of the Democratic Party with offers to help it defeat Donald Trump in this fall’s U.S. presidential election.

The head of the party branch in Canada, Steve Nardi, chuckles as he scrolls through his email inbox and describes the range of messages he gets, such as one note complaining that Democrats need better attack ads.

“Oh, I get advice,” said Nardi, a Toronto-based American expat.

He also gets warnings. “I get a lot of Canadians talking to me saying, ‘You’d better work [hard this year].'”

Finally, Nardi fields offers to volunteer — many of them. “I get requests. I get emails almost daily … from Canadians saying, ‘I want to help. How can I help?'”

It’s that last type of message that raises legal and ethical questions about what tasks foreigners are allowed to perform in a U.S. election.

Interviews with U.S. election-law experts and officials in both major U.S. political parties produced a short, clear answer to that question, and a longer, murkier one.

Every single vote will count. Canada could make the difference in an election like that.– Bruce Heyman,  former U.S. ambassador to Canada

The short answer is: U.S. election law allows foreigners to do just about anything, as long as it’s routine volunteer work.

And potentially the most impactful, least controversial of those activities is to inform friends holding U.S. citizenship who live in Canada that they’re allowed to register to vote, an initiative promoted by both Democrats and Republicans.

Canada is home to more of these eligible American voters than any other country. Nardi raises a provocative possibility: that there are enough potential voters in Canada to decide an American election.

A U.S. federal report said there were 622,492 American citizens living in Canada who were eligible to vote in the American election in 2016 — and only 5.3 per cent cast a ballot.

Consider that the election was decided by 77,744 votes combined in three major swing states — Michigan, Wisconsin and Pennsylvania. Two of those states border Canada, and the margin in Michigan was barely 10,000 votes.

“A lot of Americans don’t realize they are eligible to vote,” Nardi said. “There’s a huge, huge opportunity [in Canada] to deliver impacts.”

The rules on volunteering

The U.S. Federal Election Commission says that foreigners can volunteer during election campaigns — as long as they’re doing it in their personal time, not offering anything of monetary value, and not participating in planning election strategy.

One prominent expert on U.S. election law said he was taken aback when he checked the rules and saw how permissive they were of foreign volunteers.

“I was really surprised,” said James Gardner, a law professor at the University of Buffalo.

“That just seems quite inconsistent to me.… It sounds like someone can do phone-banking,” he said, referring to the common practice of calling voters and urging them to cast ballots for a particular party.

“It sounds like someone can do get-out-the-vote, as long as they’re not compensated.”

Being allowed is one thing, but whether a Canadian should is another. Gardner’s view is that it’s morally wrong for people to volunteer during a foreign election because it erodes basic principles of democratic self-governance; he said the country’s constitutional drafters in 1787 were deeply worried about foreign interference.

Gardner said he feels the same way about people from one U.S. state getting involved in another state’s election.

“As an ethical matter I would say, ‘Even if you can, you should not,'” he said.

What about the argument that what happens in the U.S. affects the entire world, so foreigners deserve a say?

Gardner said that logic leads to the absurd conclusion that everyone in the world should be allowed to vote in American elections. Foreigners are entitled to share opinions, perhaps even distribute voter information, but should otherwise steer clear of interfering, he said.

I don’t think you’d want a lot of Americans making calls to tell you whether or not to support Trudeau’s government.– Rick Hasen, election-law expert at the University of California

The election-law expert at the University of California in Irvine, Calif., said foreign volunteering in phone banks may be allowed, but it’s wrong and undermines democracy.

“I don’t think you’d want a lot of Americans making calls to tell you whether or not to support Trudeau’s government,” Hasen said.

Republican official: What if it’s China?

The chief executive of the group Republicans Overseas said it’s fair to register American expats to vote, though he suspects some of those expats actually have minimal ties to the U.S.

What’s less fair, he said, and what could prove controversial, is non-Americans working to defeat a president they dislike.

“You might have people outside the U.S. beat up Trump. Then you’ll have liberal Democrats cheering for that,” said Solomon Yue, who is head of the group and a Republican National Committee member.

“But in my view, that actually hurts the credibility of liberal Democrats. If you’ve really got solid grounds and you have lots of things you can say yourself about Trump, why bother using foreigners?”

He raised the spectre of foreigners in countries that have tense relationships with the U.S., such as China, calling into the United States during phone banking.

“How will people react? Yue asked. “It would be argued it’s Chinese collusion.… I wouldn’t do it.”

So how do Democrats respond when foreigners ask to volunteer?

It depends who you ask, and under what circumstances.

Democrat: ‘We’re now calling on the world to help us’

A former Obama speechwriter turned podcaster responded with unflinching enthusiasm when a Canadian listener living in the U.S. asked if he could volunteer for the Democrats.

“You can’t donate, you can’t vote, but you can do everything else. You can volunteer, you can contact voters … knock on doors … phone-bank … sign people [up],” said Jon Favreau in his podcast, Pod Save America.

“Help us out here in America. We’re now calling on the world to help us. We’re in dire straits here.”

He said party organizers in some states might allow foreigners to phone-bank — but not his group.

Nardi said his group will only share Democrats’ phone-contact lists with Americans belonging to the party: that’s because overseas party chapters call expat voters around the world, and follow the stricter European data-protection standards.

A former Obama ambassador to Canada is equally cautious when asked about foreign volunteers.

Bruce Heyman said American elections should be run by Americans.

But he’s all in on finding and registering American voters in Canada and is about to launch an initiative on overseas voting.

Most U.S. states allow people with U.S. citizenship to vote in the state where they or their parents last resided.

Yue said he suspects many U.S. expats simply don’t vote because they fear possible tax implications under the U.S.’s complex rules for citizens abroad. Nardi, on the other hand, said he’s never heard of a single problem for an expat voting in a federal race.

And if the election is as close as 2016, Heyman said, the deciding ballots could be cast in Canada.

“Every single vote will count,” Heyman said. “Canada could make the difference in an election like that.”