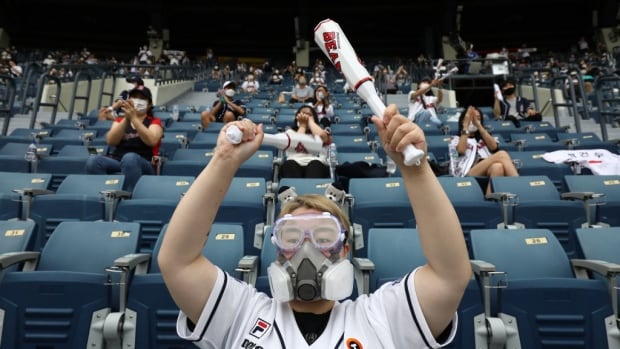 South Korean baseball fans flocked to stadiums on Sunday for the first time this year, happy and excited even as they sat apart from relatives and friends to prevent the spread of the novel coronavirus.

The country’s baseball league kicked off its season in May after a five-week delay but without spectators because of COVID-19, which has all but wiped out the global sporting calendar.

The government decided on Friday that some fans can go back, with 10 per cent of seats available at Korean Baseball Organization (KBO) games from Sunday.

All fans have to wear masks, have their temperatures checked, provide contact details and socially distance in the stands. No food or alcohol is allowed, meaning no sales of fan favourites, beer and chicken.

Tickets for the 2,424 seats up for grabs sold out in 25 minutes, said an official with the Doosan Bears, who were up against the LG Twins on Sunday.

As of Sunday morning, the global coronavirus case count topped 16 million, with more than 644,000 deaths due to the virus and 9.2 million cases considered recovered, according to data from Johns Hopkins University.

In North Korea, leader Kim Jong-un has declared an emergency and lockdown in a border town after a person suspected of being infected with the coronavirus returned from South Korea after illegally crossing the border, state media said on Sunday.

If confirmed, it would be the first case officially acknowledged by North Korean authorities.

Kim convened an emergency politburo meeting in response to what he called a “critical situation in which the vicious virus could be said to have entered the country,” the North’s KCNA state news reported.

A person who defected to South Korea three years ago returned across the fortified border that divides the two Koreas to the town of Kaesong this month with symptoms of COVID-19, the disease caused by the virus, KCNA reported.

In Britain, meanwhile, the country’s foreign secretary defended the government’s decision to immediately impose a 14-day quarantine for U.K. travellers returning from Spain, saying it just wasn’t possible to give them more notice.

Dominic Raab told Sky News that vague advice would have created more uncertainty. He said that the government must be able to take quick action to fight the virus.

The quick decision threw the plans of thousands into chaos — many of whom were startled to see such a decision imposed so quickly.

Zeta Hill is among them. The teacher from Essex in southeast England had been on holiday in Mallorca for 12 days and is due to fly back on Tuesday.

She said that while she knew she was taking a risk, the Balearic islands haven’t been as badly affected as other parts of Spain.

She said that she and her husband “have been well behaved and followed the rules, but then you look at people crowding the beaches in the U.K. a few weeks back and being really unsafe and there will have been no consequences for them.”

WATCH | Masks now mandatory in much of England:

Face coverings are now required inside most enclosed public spaces in England. England is also offering most people a free flu vaccine to guard against overwhelming hospitals this flu season. 3:31

Spain has reported more than 900 new daily infections for the last two days as authorities warn that the country that lost over 28,000 lives before getting its outbreak under control could be facing the start of a second major outbreak.

Britain has Europe’s worst outbreak, with over 45,800 confirmed virus-related deaths.

TUI, Europe’s biggest holiday company, said on Sunday it had decided to cancel all holidays to mainland Spain up to and including Sunday Aug. 9.

What’s happening with coronavirus in Canada

As of 7:45 p.m. ET on Saturday, Canada has seen 113,554 confirmed coronavirus cases. There are 5,523 active cases overall in the provinces and territories, with 99,115 listed as recovered or resolved. A CBC News tally based on provincial reports, regional health information and CBC’s reporting indicates that 8,918 Canadians have died.

Canadian charities are seeing a major drop in fundraising and participation in their running events due to COVID-19 restrictions.

Public health orders have restricted large gatherings of people throughout the spring and summer, so charities like the Canadian Cancer Society can’t hold formal events like the Run for the Cure — with opening and closing events or an official race day.

The organization says it has half the participation in its runs compared to this time last year and expects to bring in half as much revenue.

Ontario reported 138 new cases on Saturday for a total of 38,543. Thirty-three of those cases were in the Windsor-Essex area, which posted the highest number of new infections in the province on Friday — 57 cases — a majority of them involving agri-food workers.

Saskatchewan reported 37 new cases and 14 new recoveries on Saturday, or a total of 1,136 total cases and 862 recoveries.

WATCH | Should bars and restaurants be shut down following uptick?:

Infectious disease expert Dr. Isaac Bogoch says indoor spaces like bars and restaurants are contributing to the uptick in coronavirus cases among younger people, but shutting them down may not be the answer. 3:04

Health officials in British Columbia have announced a new community outbreak of COVID-19 in Haida Gwaii. Until now, the remote islands have managed to avoid any cases, but 13 local residents have now tested positive.

What’s happening in the rest of the world

Australia’s second-most populous state, Victoria, recorded 459 cases of the new coronavirus, the second-highest daily total and up from 357 cases the previous day, the state’s leader said on Sunday.

Premier Daniel Andrews also told a news briefing that Victoria had reported 10 COVID-19 deaths in the past 24 hours, Australia’s highest ever daily number.

The state’s second wave is being driven by workplace infections, including at aged-care and health-care facilities, big distribution centres, slaughterhouses, cold-storage facilities and warehouses, Andrews said.

“What that tells you is that some people… are feeling sick, they have symptoms and they are still going to work,” he said. “If that continues, then we will just continue to see more and more cases.”

Australia has avoided the worst of coronavirus crisis seen in other countries, but authorities are struggling to contain an outbreak in Victoria. It has recorded more than 14,400 cases so far.

In Japan, officials confirmed 239 new coronavirus infections in Tokyo on Sunday as the capital struggled with a resurgence in cases after the government lifted a state of emergency. The total marks the sixth straight day new cases in the city have exceeded 200.

While Japan was spared the kind of surge in infections that have killed tens of thousands in other countries, Tokyo has raised its coronavirus alert to the highest level after a series of new cases.

In the United States, parents are trying to decide how their children will learn this fall amid the pandemic, weighing the benefits of in-person instruction against the risks that schools could shut their doors again or that their children could contract the virus and pass it on.

About 70 per cent of Americans surveyed for a recent poll think schools should open in the fall, though most of those think it should happen with restrictions.

According to the poll from The Associated Press-NORC Center for Public Affairs. only eight per cent of participants said schools should operate normally.

The U.S. leads the world with more than 4.1 million confirmed infections and over 146,000 deaths, according to data compiled by Johns Hopkins University.

In Brazil, President Jair Bolsonaro says he has tested negative for the coronavirus. That’s based on a fourth test since announcing July 7 he had the virus.

In Africa, the continent’s total confirmed coronavirus cases has surpassed 800,000.

That’s according to the Africa Centers for Disease Control and Prevention.

South Africa has more than half the reported cases on the continent. But infections are now climbing rapidly in other countries, including Kenya, East Africa’s economic hub, with more than 16,000.

Authorities confirmed 22 cases in Urumqi, a city in the Xinjiang region in the country’s far west, the official Xinhua News Agency said.

That raised the total in the local outbreak to 137 since the first case was detected 10 days ago. Another 13 cases were confirmed in Liaoning province in the northeast, bringing the total there to 25, almost all in the city of Dalian.