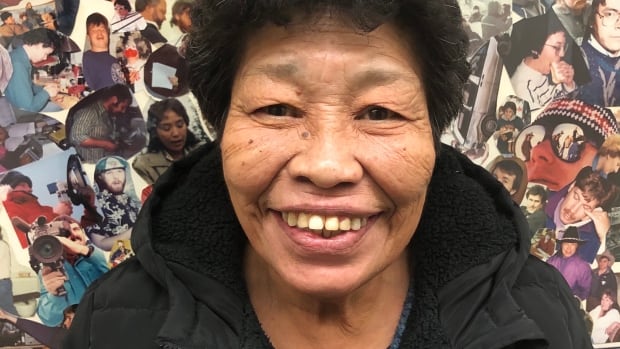 Three years and countless hours of audio material later, Bertha Catholique is the first of 17 people to finish translating stories in her language for the CBC’s Indigenous languages archives project.

“I feel like I’m leaving a legacy behind as … a language keeper and a teacher,” said Catholique, who is originally from Łútselk’e and speaks Dënësųłinë́ — or Chipewyan.

“I’ve always been working with my language, and I’m so passionate for my language.”

Catholique says she clocked about 3,500 stories from the archives, which she translated into English. Some of the oldest material she worked on dates back to the early 1970s.

The translators, in Yellowknife, Iqaluit, Whitehorse, Montreal and Toronto, have been working for about three years to preserve and archive 75,000 hours worth of recorded stories collected over six decades in eight Indigenous languages: Gwich’in, Inuvialuktun, Tłı̨chǫ​,​​​ North Slavey, South Slavey, Dënësųłinë́, Cree and Inuktitut.

Among the stories Catholique translated was one she first heard as a child.

In it, her late auntie recalls going out trapping with her family — something they did every spring. But during this particular trip, Catholique’s cousin suddenly heard the sound of an airplane while out playing, and discovered it had crashed.

When the family went to investigate, they found a mother who had been killed. But, miraculously, her baby was still alive.

“I always wanted to know the real truth, and she told the truth and I recorded it,” said Catholique. “So that really stood out in my mind.”

That’s not the only time Catholique has heard a familiar voice on the old tapes. She recognized many people — from cousins, to uncles, to friends.

“The only people that I didn’t really know [were] people from [the] Saskatchewan area,” she said. “But it’s funny — I got to know them through their stories.”

Love for language began in childhood

Catholique has been a translator of sorts since she was a kid.

When her family moved from Łútselk’e to Yellowknife when she was young, she learned to speak Tłı̨chǫ. Her mother also taught her English.

“My dad, he always encouraged me, telling me to go to school to learn the language because he didn’t know how to read and write in English. So I taught him how to write his name,” she said.

“I always interpreted for him then. So ever since then I just thought, ‘OK, well I’ll just go with the language.’ And I love doing it too.”

But it’s no walk in the park; translating is hard work, Catholique says.

At times, she’d find herself stuck on a word. However, she says she could always find help from the other archivists — even those who don’t speak Chipewyan.

“Because we all are originally from the land, even though we have different languages, we all still have the same lifestyle. So that’s how we’re helping each other,” she explained.

“Tłı̨chǫ and Chipewyan are almost really close. [Another translator] would say something in Tłı̨chǫ language, and then that’s how I’d pick it up.”

Especially when the elders are telling you a joke in their language, it’s more funny if you really understand.– Bertha Catholique

There were moments of humour too.

“Especially when the elders are telling you a joke in their language, it’s more funny if you really understand,” Catholique said. “That’s what I like about it.”

The CBC’s Indigenous languages archives project is not only a way to preserve the intricate history of the North and its people, but to share it with the rest of the world.

Stories are being digitized from reel-to-reel tape that has been deteriorating over the years — some of it dating back to the 1950s. The hope is to eventually make the recordings available online through different organizations.

Catholique says she didn’t know much about cataloguing when she first got the job. Now, with thousands of stories under her belt, she’s proud of her work.

She also has a message for others, which she originally shared in her own language.

“I just told them that it’s really good to be educated, to go to school and also hang on to your language,” she said. “Because the language makes you a person who you are, and you’re stronger if you can speak your language well.”