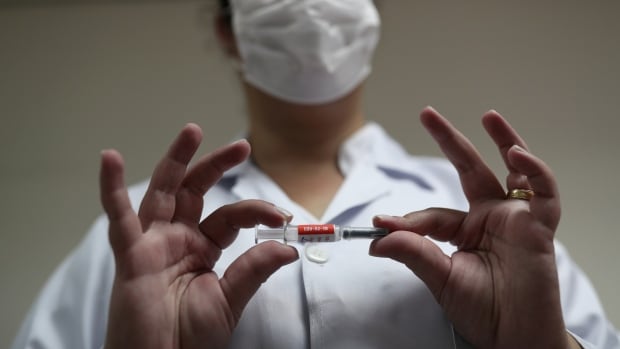 For months, governments around the world have imposed lockdowns and travel bans, shuttered schools, and blocked visitors from hospitals and long-term care homes, all in the name of slowing transmission of the new coronavirus.

But most members of the medical community agree widespread uptake of an eventual vaccine is what’s needed for the COVID-19 pandemic to finally fizzle out.

“We’re not going to return to normal the minute a vaccine is approved,” said researcher Matthew Miller, an associate professor at McMaster University’s department of biochemistry and biomedical sciences.

“We’re only going to return to normal when the vast majority of the population is immune to the virus.”

So will enough Canadians agree to get vaccinated to make that happen?

Survey results released on Tuesday from the non-profit Angus Reid Institute found half of Canadians say they have no reservations and are ready to get a COVID-19 vaccination as soon as it’s available.

But 32 per cent — roughly a third of respondents — say they’d likely wait a while. Another 14 per cent don’t want to get a vaccine at all.

Concerns about possible side effects

The findings were based on a survey conducted between July 23 and 24 among a representative randomized sample of 1,519 Canadian adults who are members of Angus Reid Forum, an online panel.

Ève Dubé, a medical anthropologist and researcher on public health and vaccination at the Quebec National Institute of Public Health, said for the small portion of people who are routinely anti-vaccine, it can be “really hard to change their minds.”

Then there’s typically a larger group of people who are somewhat hesitant to get vaccinated. In the case of a potential COVID-19 vaccine, their concerns are often based on safety, given the unprecedented speed of the research — which is crunching what typically takes a decade into less than two years.

Among the third survey respondents who want to hold off on getting a vaccine, 76 per cent said they’re worried about side effects.

“Those people are not strongly opposed,” Dubé said. “But they have questions and fears.”

Hamilton, Ont., resident Amanda Perino counts herself among them.

Typically, the mother of two considers herself “pro-vaccine,” with both her children getting all the standard shots for measles and other illnesses. But in the case of an eventual option for COVID-19, she’s warier.

“I just have reservations on long-term effects,” Perino said. “We don’t even know what the long-term effects of COVID are, either. I just don’t know if we know enough about the virus itself to have a vaccine that’s safe.”

Researcher Maya Goldenberg, an associate professor in the department of philosophy at the University of Guelph who’s written extensively on vaccine hesitancy, said the medical community needs to handle these kinds of “legitimate” concerns with care.

Doing so will require patience, not irritation or dismissal, on the part of healthcare providers, she said.

“There will be concerns about whether it’s been tested properly, and if the rush means we’re going to be cutting corners on safety,” Goldenberg said.

“The number one thing to do is not blame and shame people when they have questions. This is true for vaccines for children, for flu — anything.”

Several Canadian vaccine experts also stressed that, despite the rapid pace of research prompted by the pandemic, the expectation remains that any vaccines going to market must be both safe and effective.

Miller, who researches immune responses to viral infections, said it’s critical to know the more than 160 potential COVID-19 vaccines in development must go through phase three trials with huge numbers of human participants — often in the tens of thousands — to flag any safety issues.

“I would have confidence that the [COVID-19] vaccines will be assessed in terms of safety as rigorously as other vaccines,” said Manish Sadarangani, an assistant professor at the University of British Columbia and director of the vaccine evaluation centre at B.C. Children’s Hospital.

“They’ll still need to go through all the stages of clinical trials, which have safety and monitoring boards to review all the data.”

Trials can be paused at any time if issues arise, he said. And any successful vaccines will still require approval in this country from Health Canada.

WATCH | How the COVID-19 vaccine process is being sped up:

Some potential COVID-19 vaccines are already in the third stage of clinical trials. It’s taken a lot of effort and money to squeeze a process that can normally take five years into about 10 months and still be done safely. 2:17

Vulnerable groups may remain at risk

While those layers of regulatory red tape may not ease all minds, Miller and Sadarangani both noted that once a vaccine is finally approved, it will still take considerable time to ramp up production for the general public.

“We’ll need to have enough doses to vaccine everyone who needs vaccinating,” Sadarangani said.

In the interim, he said there will likely need to be prioritization of people who are most at risk of exposure or severe impacts from the virus, including healthcare workers, the elderly, and anyone with chronic medical conditions or a compromised immune system.

The unfortunate reality, Miller said, is that people with weaker immune systems — whether it’s due to their age or health issues — tend to respond the poorest to vaccines.

He warned many of those groups may remain high-risk for a serious bout of COVID-19 even after vaccination if a large chunk of the broader population opts out since there won’t be widespread herd immunity to control the virus’ spread.

“If we don’t achieve that,” Miller said, “we risk not being able to protect those who need the vaccine’s protection the most.”