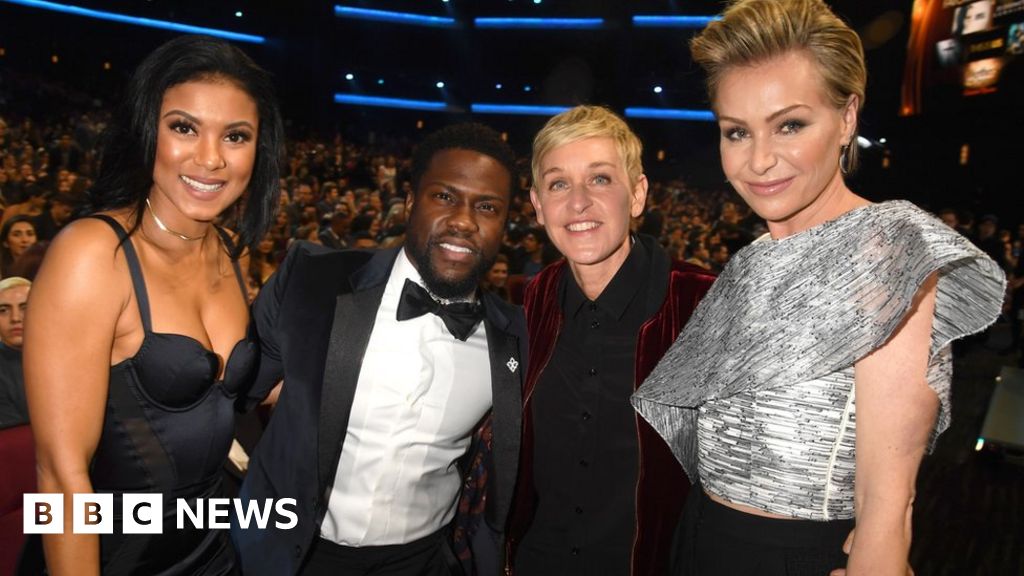 Comedian Kevin Hart, singer Katy Perry and other stars have come to Ellen DeGeneres’ defence after allegations that her TV show is a toxic workplace.

However, the show’s one-time resident DJ has said he “did experience and feel the toxicity of the environment”.

It follows a Buzzfeed News story that claimed senior staff had bullied and intimidated others on set.

DeGeneres later apologised to staff, saying steps would be taken to “correct the issues” that had come to light.

One current and 10 former employees told Buzzfeed they had experienced racism and a workplace that was “dominated by fear”.

On Tuesday, Tony Okungbowa, who was the programme’s DJ from 2003-2006 and 2007-2013, echoed those accounts, adding: “I stand with my former colleagues in their quest to create a healthier and more inclusive workplace.”

While I am grateful for the opportunity it afforded me, I did experience and feel the toxicity of the environment and I stand with my former colleagues in their quest to create a healthier and more inclusive workplace as the show moves forward.

DeGeneres has distanced herself from the accusations, saying she had been “misrepresented” by “people who work with me and for me”.

Some of the host’s celebrity friends have now closed ranks. Hart said he had known DeGeneres “for years” and called her “one of the dopest people on the… planet”.

He wrote on Instagram: “It’s crazy to see my friend go thru what she’s going thru publicly… The internet has become a crazy world of negativity… We are falling in love with peoples down fall [sic].”

Perry said she had “only ever had positive takeaways” from appearing on DeGeneres’ daytime talk show.

Writing on Twitter, the pop star called her a “friend” and said she was sending her “love & a hug”.

She went on: “I think we all have witnessed the light & continual fight for equality that she has brought to the world through her platform for decades.”

Other celebrities to have backed DeGeneres include actors Diane Keaton and Ashton Kutcher.

I haven’t spoken with @TheEllenShow and can only speak from my own experience. She & her team have only treated me & my team w/ respect & kindness. She never pandered to celebrity which I always saw as a refreshing honesty. When things aren’t right she handles it and fixes.

DeGeneres’ wife Portia de Rossi took to Instagram on Tuesday to thank fans for their support.

“To all our fans… we see you,” wrote the former Ally McBeal actress, who married DeGeneres in 2008.

Yet other stars have supported the claims made against her programme, among them Everybody Loves Raymond actor Brad Garrett.

“Sorry but it comes from the top,” he wrote on Twitter when DeGeneres’ letter to staff was made public last week.

“Know more than one who were treated horribly by her,” he added, saying such alleged behaviour was “common knowledge”.

In her letter to staff, the host wrote: “On day one of our show, I told everyone in our first meeting that The Ellen DeGeneres Show would be a place of happiness.

“Obviously, something changed, and I am disappointed to learn that this has not been the case.”

The claims led to an internal inquiry by production company WarnerMedia, who said there would be “several staffing changes” as a result.

Meanwhile, viewing figures for DeGeneres’ show fell to “a new series low” last month, according to The Wrap.

It said ratings for the penultimate week of July were down 9% on the previous week and 29% down on the equivalent week in 2019.