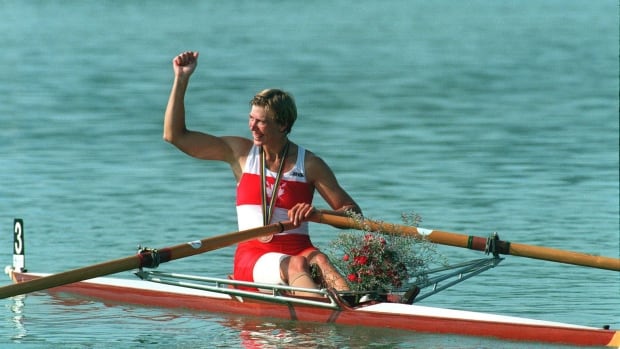 Laumann rowing to a bronze medal with a mangled leg at the 1992 Summer Olympics in Barcelona is part of Canadian sport lore.

Paralyzed from the waist down in a biking accident in 2018, Taylor decided while in hospital she was going to be a paratriathlete.

When told recently that Laumann was giving her $15,000 towards a new handcycle and racing wheelchair, Taylor did a double take.

“I knew she was a rower. I knew that she’d gotten injured and had some kind of comeback,” Taylor said Wednesday from Oak Bluff, Man.

“Honestly, beyond that I didn’t know too much. My parents did. When I mentioned Silken Laumann wants to buy this equipment, they’re like ‘wait a minute. Who?’ Then I read her book and I was like ‘oh yeah, that is a big deal.”‘

Laumann, who lives in Victoria, and the 28-year-old Taylor met each other for the first time Wednesday morning via a virtual call.

“I really was captured by her drive,” Laumann said.

“I thought of this young woman who finds herself in the hospital, her life changed instantly, her whole path, all her dreams, everything radically changed, and now living in a wheelchair. And she decides to go for the Paralympics.”

When Taylor flipped her mountain bike July 7, 2018, she suffered a spinal injury that paralyzed her below the waist.

She won the Canadian para-triathlon championship in her classification a year later. Taylor placed in the top 10 in three other international races in 2019 despite racing on hand-me-down equipment.

The wheels on one of her racing chairs rubbed if she went too fast.

“It’s game changing,” Murray said. “Leanne started the sport not that long ago. Everything’s progressing really quickly, her commitment to the sport, her ability to compete.

Triathlon Canada couldn’t afford to buy the equipment for her, Murray said.

Because Taylor is so new to the sport, she doesn’t have enough results to be a “targeted athlete” and qualify for Own The Podium funds.

Taylor works as a compliance officer for a pharmaceutical company in Winnipeg. Representing Canada at the 2024 Paralympic Games in Paris was her initial goal.

The postponement of the Tokyo Games to 2021 opened a window of opportunity for Taylor, particularly now that she has state-of-the-art equipment.

“If you look at what I’m able to pull off in this equipment, it makes it possible,” Taylor said. “You generally hear ‘the first time you take it out don’t judge it, it’s going to take time for you to get used to it and if you hate it the first time that’s normal.’

“But I actually got in it the first time and did a personal best.”

Taylor needs to compete in order to qualify for Tokyo. She ranked 13th in the world when the COVID-19 pandemic halted races. She must be ranked in the top nine to get to Tokyo.

Laumann won a single sculls Olympic silver medal in 1996. It was her bronze in Barcelona that challenged perceptions about the human body’s limits.

A collision with a German rowing shell just weeks out from the Barcelona Games shattered her ankle and shredded her calf muscles.

Upon learning Taylor’s story, Laumann felt a kinship with the athlete.

“There must have been that resonance at some level,” Laumann said. “I think it’s about having agency, isn’t it? It’s about crappy things happening, but still being able to have control and goals in your life.”

Laumann became a mental-health advocate with the release of her autobiography “Unsinkable”. Her memoir revealed the depression and anxiety she’s felt in her life.

“We’re creating basically a social movement around positive mental health, but it’s not that concrete right?” Laumann explained. “It’s long-term and the impact is measured in centimetres at a time. I know the complexity of real social change.

“It was a significant contribution, but it felt like it really was going to make a difference in this person’s life.”