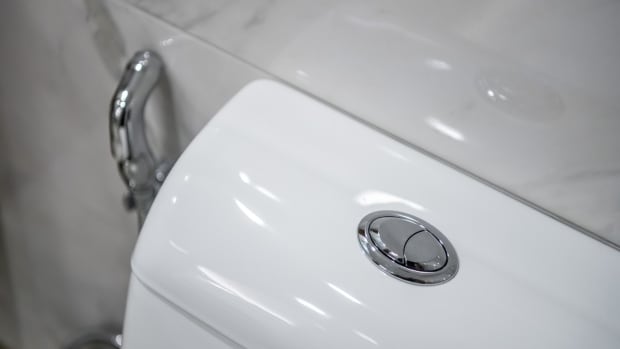 Toilets designed to save water are actually wasting it at an alarming rate, says the U.K.’s largest water utility.

Dual-flush toilets have separate buttons for heavy or light flushes with the goal of reducing the overall mount of water used. But a design flaws and poor materials means they’re far more likely to leak or be misused, according to data collected by Thames Water.

“We’re working with the industry, working with manufacturers, to engineer this problem out of existence,” Andrew Tucker, the utility’s efficiency manager, told As It Happens guest host Helen Mann. “But we’ve got a long way to go yet.”

Between five and eight per cent of toilets in the U.K. are leaky, and most of those are dual-flush, the water conservation organization Waterwise told the BBC. That means some 400 million litres of water leak from U.K. toilets ever day — enough to supply 2.8 million people.

Why do they leak?

The problem, says Tucker, is with the design.

First, there are the flush buttons themselves. Tucker says it’s not always clear to users which button produces a small flush of about four litres for urine, versus the bigger flush of about six litres required for feces.

“The dual-flush buttons over time become more esthetically pleasing, I guess, and those moved a little bit toward form over function,” he said.

“We’ve been testing this through social media and also customer research, and just after a few very, very simple questions, over 50 per cent of our customer base didn’t really know which button to push.”

The other problem is with the flush mechanism. Dual-flush toilets usually have a mechanical valve with a rubber seal in the cistern that opens to allow water to flow when flushed.

That rubber seal can rapidly deteriorate, says Tucker. And even if it doesn’t, debris like porcelain or grit can easily obstruct it, causing the water to flow continuously.

“Then there’s no redundancy, there’s no safety factor built into it,” Tucker said.

“And that’s something that we’re seeing more and more every year with more dual-flush toilets being put into older homes through refurbishment or new homes being built.”

Older toilets tend to use a siphon system, which pushes water upward in a tube connected to the bowl. Once the water reaches a certain height, it flows into the bowl. Water can only escape when it rises above the water line, so leaking is rare.

Is your toilet leaking?

To check if your toilet is leaking, Tucker recommends checking the water in the bowl for a ripple at the back.

“If you’re seeing a tiny ripple, it could be one to 200 litres a day,” he said. “And [if] we’re seeing many thousands of litres a day, it’s pretty obvious, and you can genuinely hear it from outside the room.”

If it is leaking, Tucker recommends getting a new toilet. It’s a reasonable investment considering the impact a leaky toilet can have on your water bill, he said.

The problem, says Tucker, is that the vast majority of toilets on the market now are dual-flush. He recommends doing your research to make sure the model doesn’t have a history of leaks, and to look for valves with a sturdier silicone seal instead of rubber.

He doesn’t think the idea is to use older-model toilets, though. While they are less prone to leaks, they also uses more water per flush — up to 13 litres, according to Waterwise.

The key, he said, is to improve the dual-flush design.

“If we can if we can crack this issue, then the dual-flush toilet really has a bright future,” he said. “So we need to fix this problem and just get back to basics and be as sustainable as possible.”