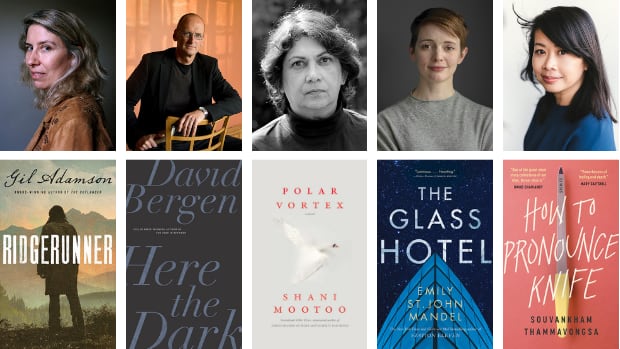 Three novels and two short story collections have made the shortlist for the 2020 Scotiabank Giller Prize.

The $100,000 prize is the biggest prize in Canadian literature.

Past winner David Bergen is nominated for his short story collection Here the Dark. He won the Giller Prize in 2005 for his novel The Time in Between, and was shortlisted in 2010 for the novel The Matter with Morris.

Thammavongsa is one of three jurors for the 2021 CBC Short Story Prize, which is open for submissions until Oct. 31.

The nominated novels are Ridgerunner by Gil Adamson, Polar Vortex by Shani Mootoo and The Glass Hotel by Emily St. John Mandel.

Mootoo was previously shortlisted for the Giller Prize in 1997 for her debut novel Cereus Blooms at Night,

The shortlist was selected from 118 books that were submitted for consideration. A longlist of 14 books was revealed in early September.

2020 was the first year graphic novels were eligible for the prize. One graphic novel, Clyde Fans by Seth, made the longlist.

The winner will be announced in a virtual awards ceremony on Monday, Nov. 9. The ceremony will be hosted by actor Eric McCormack and will feature musical guest Diana Krall.

McCormack is a Canadian actor best known for his portrayal of Will Truman in Will & Grace. He has also starred in the TV shows Lonesome Dove, Trust Me and Perception and on Broadway in the shows The Music Man and The Best Man.

The ceremony will be broadcast on CBC, CBC Gem and CBC Radio at 9 p.m. local time (11:30 AT/12 midnight NT) and will be streamed online at CBC Books, YouTube and Facebook at 9 p.m. ET.

Between the Pages, a virtual event celebrating the 2020 finalists, will take place on Monday, Nov. 2 at 7:30 p.m. It will be hosted by q‘s book columnist Jael Richardson.

Other past Giller Prize winners include Esi Edugyan for Washington Black, Michael Redhill for Bellevue Square, Margaret Atwood for Alias Grace, Mordecai Richler for Barney’s Version, Alice Munro for Runaway, André Alexis for Fifteen Dogs and Madeleine Thien for Do Not Say We Have Nothing.

Get to know the shortlisted books and writers below.

Ridgerunner is a novel about William Moreland, the notorious thief known as Ridgerunner, as he moves through the Rocky Mountains, determined to secure financial stability for his son. His son, Jack Boulton, is trapped in a life not of his own making. Semi-orphaned and under the care of a nun, Sister Beatrice, Jack has found himself in a secluded cabin in Alberta. Little does he know, his father is coming for him.

Adamson is a writer and poet. Her first novel, The Outlander, won the Amazon.ca First Novel Award and was a Canada Reads finalist in 2009, when it was championed by Nicholas Campbell. She has published several volumes of poetry, including Primitive and Ashland.

Giller Prize jury citation: “The long-awaited sequel to Gil Adamson’s hit The Outlander moves the action forward a decade, returning the 13-year-old son of the original protagonists to a forested land into which prisoners of the first world war are now hewing roads. The proximity of this new type of outlaw presents an existential threat to young Jack, who takes refuge in his parents’ abandoned shack with a price on his head after escaping the toxic hypocrisies of ‘civilisation’. Drawing richly on both the Western and on gothic fiction, Adamson evokes a mythic landscape to frame the question: how is it possible to live a good life, when obedience to man-made laws is so at odds with love, loyalty and respect for the natural world?”

Here and Now Toronto6:49Author Gil Adamson on Ridgerunner, her follow-up book to her debut novel, The Outlander

The Amazon first novel award, a Canada Reads finalist, a Globe & Mail book of the year… that’s just a fraction of the praise heaped upon Gil Adamson’s debut novel The Outlander. Great news for fans of that backwoods adventure thriller, the long-awaited follow-up has arrived. Ridgerunner has just been published by House of Anansi press and Gil Adamson joined our Gill Deacon for Here and Now’s Tuesday afternoon book club. 6:49

In Here the Dark, David Bergen delivers short stories that interweave across space, exploring faith, loss and complex moral ambiguities. From Danang, Vietnam, to Honduras and the Canadian Prairies, the book collects narratives about place and heart. Here the Dark includes the story that won the 1999 CBC Short Story Prize, How can men share a bottle of vodka.

Bergen is a Canadian novelist and short story writer. In 2005, his novel The Time in Between won the Scotiabank Giller Prize. His other books include The Matter with Morris, and Stranger in 2016. His novel The Age of Hope was defended by Ron MacLean on Canada Reads in 2013.

Giller Prize jury citation: “A dying woman asks an aging rancher to become her last lover. A fishing boat sputters to a halt off the coast of Honduras, compelling its owner to decide the fate of his repellent client. A young woman in a puritanical religious community glimpses the coloured world outside, and must choose whether to close her eyes, or to run. Sexual loneliness and moral confusion pull at the delicately wrought characters in David Bergen’s latest work, a story collection of masterly skill and tension. His third appearance on the Giller shortlist – including the 2005 winner, The Time in Between – affirms Bergen among Canada’s most powerful writers. His pages light up; all around falls into darkness.”

Up To Speed6:43Winnipeg author back on longlist for Giller Prize

It is the biggest prize in writing in Canada. Today, the longlist for the 2020 Scotiabank Giller Prize was revealed and Winnipeg author David Bergen has made the cut. He joined Marjorie Dowhos on Up to Speed! 6:43

Abandoning the city for the picturesque countryside, Priya and Alexandra attempt to give themselves a new lease on life in the novel Polar Vortex. That is, until Priya reveals that she is running from a fraught relationship with a friend who kept pursuing her: Prakash. After Priya feels safe enough to once again establish an online presence, Prakash communicates with her. Inexplicably, Priya asks Prakash to visit them.

Mootoo is a writer and visual artist who has been longlisted for the Man Booker Prize. Her debut novel was 1997’s Cereus Blooms at Night.

Giller Prize jury citation: “A keen meditation on the complexities of identity and desire, Polar Vortex is the unsettling examination of a failing marriage.  In a small, southern Ontario town, Priya impulsively invites an old suitor, Prakesh, to spend the night and his arrival triggers the fault lines in her relationship with Alexandra.  Conflicting wants and untold truths drag the past into the present.  Memories cascade and clash as Mootoo masterfully dismantles the stories the narrators tell themselves in language as unsparing as winter.”

The Next Chapter18:02Shani Mootoo on Polar Vortex

Shani Mootoo on her new novel Polar Vortex, about the secrets, lies and half-truths at the heart of a love triangle. 18:02

Emily St. John Mandel’s new book, The Glass Hotel, interweaves several complex narratives. Vincent is a bartender in a prestigious hotel on Vancouver Island. When the owner — Jonathan Alkaitis — passes Vincent his card, it becomes the beginning of their story together. Meanwhile, a hooded figure scrawls a cryptic note on a wall in the hotel, and a shipping executive for a company called Neptune-Avramidis — Leon Prevant — sees the note and is shaken. Thirteen years later, Vincent disappears from a Neptune-Avramidis ship.

Mandel is a New York-based Canadian writer. Her fourth novel, Station Eleven, was a finalist for a National Book Award and the PEN/Faulkner Award and won the 2015 Toronto Book Award.

Giller Prize jury citation: “A boldly lyrical tale echoing the deceit and ruin of the 2008 financial crisis, The Glass Hotel brings together two restless siblings and a multi-billion-dollar investor as they each negotiate ambition, secrets, and loss within the kingdom of money. Bridging the natural beauty of the Pacific Northwest, the shops and towers of Manhattan, and the netherworld of open waters, the novel commands a broad array of characters and a plot of kaleidoscopic intricacy.  Here, in her eagerly anticipated follow-up to Station Eleven, Emily St. John Mandel turns her gifted attention to the mirages of now, and to the truth that we are haunted, always, by the lives of others.”

The Next Chapter16:03Emily St John Mandel on The Glass Hotel

Emily St John Mandel on The Glass Hotel, her follow-up to her breakout novel Station Eleven. 16:03

How to Pronounce Knife is a collection of idiosyncratic and diverse stories, from a young man painting nails in a salon, to a housewife learning English from soap-operas. Capturing the daily lives of immigrants, Souvankham Thammavongsa captures their hopes, disappointments, trauma and acts of defiance.

Thammavongsa is a writer and poet. Her stories have won an O. Henry Award and appeared in Harper’s, Granta, The Paris Review and NOON. She has published four books of poetry, including 2019’s Cluster. CBC Books named Thammavongsa a writer to watch in 2020. She is a juror for the 2021 CBC Short Story Prize.

Giller Prize jury citation: “How to Pronounce Knife is a stunning collection of stories that portray the immigrant experience in achingly beautiful prose. The emotional expanse chronicled in this collection is truly remarkable. These stories are vessels of hope, of hurt, of rejection, of loss and of finding one’s footing in a new and strange land. Thammavongsa’s fiction cuts to the core of the immigrant reality like a knife – however you pronounce it.”

Souvankham Thammavongsa is a Toronto based author and poet. She was nominated for the 2020 Scotiabank Giller prize for “How to pronounce knife.” We speak with her about what it is like to release a book during a pandemic. 13:37