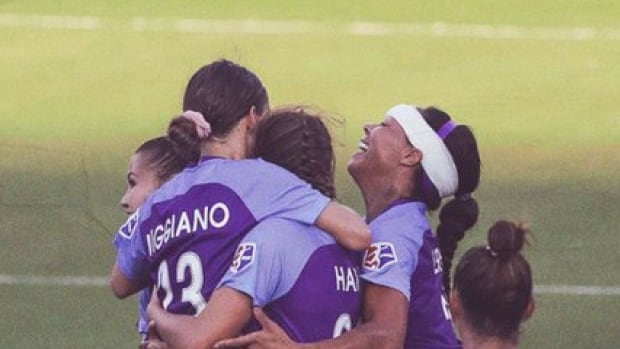 Canadian Ally Haran scored in stoppage time to give the Orlando Pride a 3-3 come-from-behind draw with the North Carolina Courage in a fall series match Saturday in the National Women’s Soccer League.

The Courage led 3-0 at the half. On a run from the midfield, Debinha scored against Pride goalkeeper Ashlyn Harris in the 18th minute.

Lynn Williams added to North Carolina’s lead with a goal in first-half stoppage time and a short time later Debinha scored her second goal. It was Debinha’s fourth goal of the fall series and her second brace.

The Pride closed the gap early in the second half when Marisa Viggiano scored on a rebound of a shot from Sydney Leroux. The Pride got closer with Kristen Edmonds’ goal in the 71st minute, then tied it on Haran’s goal, off a cross from Marta, in stoppage time.

Haran, from Stratford, Ont., entered the game as a substitute in the 85th minute, replacing fellow Canadian Jordyn Listro of Toronto.

Ally Haran of Stratford, Ont., scored in stoppage time to give the Orlando Pride a 3-3 come-from-behind draw with the North Carolina Courage in both teams’ final fall series NWSL match. 1:50

It was the final game of the fall series for both teams. The Pride, who withdrew from this summer’s Challenge Cup tournament because of positive COVID-19 cases, finished 0-2-2.