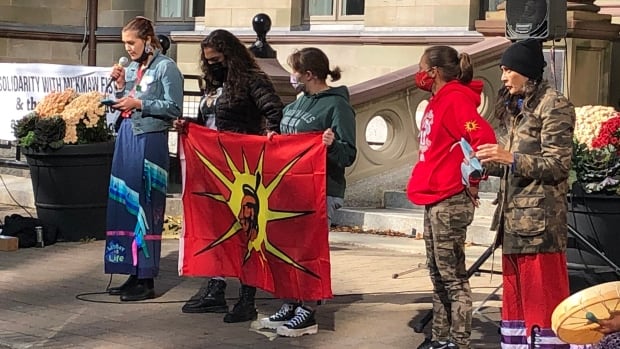 Hundreds of people gathered in Halifax on Sunday afternoon to show their support for Mi’kmaw fishers and their “moderate livelihood” lobster fishery in the wake of ongoing tensions in the southwestern part of the province.

People carrying signs reading “We see through your racism” and “All eyes on Mi’kma’ki” stood together in Grand Parade, a downtown square, cheering the passionate speeches being made on the steps of city hall.

“Our nation is in danger,” said Kyra Gilbert, a young Mi’kmaw woman, to loud cheers.

Mi’kmaw women who have been on the front lines during recent violence over fishing rights in Digby and Saulnierville spoke about the toll it’s taken on the community and their disgust and disappointment with the RCMP response.

Jenna Chisholm, a Mi’kmaw woman from Millbrook First Nation, told the crowd that it’s up to every person at the rally to keep fighting for treaty rights and the respect Indigenous fishers and people deserve.

She also sent well wishes to the front-line fishers and Mi’kmaw community members defending the fishery and continuing to call on the federal government, and country, to let them know that “we will not sit back.”

“We will not let this happen. We have been here for thousands of years, this is our land,” Chisholm said.

When he looked out at the sea of people, Mi’kmaw elder Billy Lewis said he was surprised to see just how many people were there, adding it shows just how important the fishing dispute is.

No matter where someone is from, he said, we know “what’s right and wrong.”

The rally took place a day after a fire broke out in Middle West Pubnico, at one of two facilities vandalized by commercial fishermen earlier this week.

Police have called the fire suspicious and said a man is in hospital with life-threatening injuries believed to be related to the blaze.

More RCMP officers arrived in the area on Sunday, including an emergency response team, a critical incident command team and officers from Prince Edward Island who are trained in de-escalation and crowd control.

Tensions have been simmering for weeks in the province’s southwest, sparked by the launch of the Mi’kmaw fishery outside the federally mandated commercial season — 21 years after the Supreme Court of Canada ruled in the case of Donald Marshall Jr.