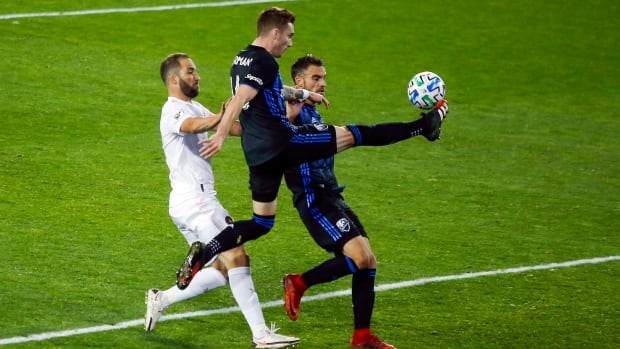 The Montreal Impact earned an important win as they kept their hopes for a playoff berth alive.

Urruti tapped a one-touch shot into an empty net to give Montreal (7-10-2) the lead in the 80th minute. Romell Quioto played a through ball that led a charging Krkic to the right side of the area, where rolled a short pass to Urruti for the finish from point-blank range.

“It’s was important for the team,” Krkic said. “We needed that win. We have a good team and good players. I know what I can do and I feel confident with my team and the staff. I enjoy being on the field and playing football.”

Krkic opened the scoring in the sixth minute, slipping a right-footer from 30 yards inside the post.

Brek Shea rolled in a shot from the left corner of the area that deflected off defender Zachary Brault-Guillard and then goalkeeper James Pantemis before finding the net to make it 1-1 in the 33rd.

The Impact are now in eighth place in the Major League Soccer standings. The 10 best teams in the Eastern Conference will qualify for the postseason alongside the Western Conference’s eight playoff clubs. Montreal began the game outside of a playoff position and were without defenders Rod Fanni and Luis Binks.

“This win is well deserved,” Impact manager Thierry Henry said. “The less you play games, the more they become must-win games. It was important to win this one.”

The Impact have four games left to play in their season. The team will square off against New York City FC next Saturday at Yankee Stadium.