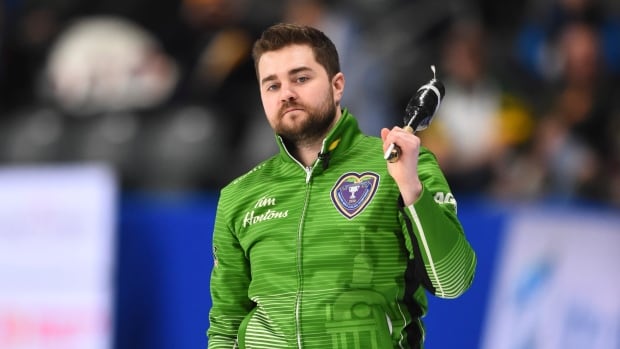 After being advised this month that they couldn’t compete outside the province due to the pandemic, teams were dealt another blow Thursday night when they were told a provincial men’s tour event scheduled for this weekend in Regina had been postponed.

After a team meeting Friday, Dunstone vice-skip Braeden Moskowy said they had explored all possible options for playing in Saskatchewan and the next move was likely “packing up our bags” and moving out of province, possibly to Alberta.

“We’re starting to look for some places in Calgary maybe, or wherever it might be, and set up shop there for the winter,” Moskowy told The Canadian Press from Regina. “Obviously then we won’t be restricted from playing anywhere that we want. Unfortunately that’s where it looks like things are headed.

“Obviously a lot of details to work out but that’s the direction that we’re most likely going to be going at this point. We don’t really have any other options.”

The provincial curling association, CurlSask, said in a statement Friday that the men’s event and women’s tour stop in Martensville, Sask., were postponed “out of an abundance of caution.”

“The decision was reached based on the advice of the Government of Saskatchewan’s Business Response Team and the recent increases in COVID-19 cases,” the statement said. “We appreciate the understanding and co-operation of organizers, clubs and athletes who continue to do their part to prevent the spread of COVID-19.

“We will continue to review protocols in consultation with health authorities to ensure that we are in the best possible position to keep our sport and our province safe.”

Saskatchewan reported 33 new cases of COVID-19 on Friday and has 511 active cases overall.

WATCH | The legacy of Aly Jenkins:

Curler Aly Jenkins died suddenly on Oct. 20, 2019 while giving birth to her daughter, Sydney. One year later, her husband Scott is trying to pick up the pieces, making sure their three children remember their mom’s legacy. 5:07

Several top domestic curling events have been cancelled or postponed due to the pandemic, forcing many elite teams to focus on regional events. Clubs and teams are following return-to-play guidelines from Curling Canada along with any provincial/territorial or local restrictions.

With limited options for competition, Team Dunstone spearheaded the creation of a five-team Vaderstad Saskatchewan Super Series event last weekend in Regina, a competition that went off without a hitch.

A total of 24 teams were entered in this weekend’s bonspiel at the Highland Curling Club. With six sheets at the facility, a maximum of 48 players would be in the rink at one time.

Provincial guidelines say that for sports where participants are unable to adhere to physical distancing, groupings or so-called mini-leagues should be formed. Mini-leagues can be comprised of multiple teams, but no more than 50 individuals.

Dunstone said the Saskatchewan Health Authority approved this weekend’s 24-team event two weeks ago and he didn’t understand why a postponement was needed one day before the start.

“We feel like we’re doing what we’re told and doing it to the best of our abilities and yet when push comes to shove, I guess that’s not good enough for them,” he said.

It wasn’t clear whether the fact that 96 curlers were set to participate was a factor in the decision. A message left with the Saskatchewan Health Authority was not immediately returned.

“Every time we turn around there’s a new rule that comes out of thin air being thrown at us with no real rhyme or reason,” Moskowy said.

“A lot of people are left scratching their heads at this one,” Dunstone added.

CurlSask executive director Ashley Howard was not available for an interview.

The Dunstone rink originally planned to play bonspiels this fall in Red Deer, Alta., and Penticton, B.C., but they haven’t been able to confirm their participation due to the provincial restrictions.

Dunstone, second Kirk Muyres and lead Dustin Kidby are all working from home and could continue to do so remotely from out of province if needed, Moskowy said.

“We’re not too sure on all the logistics but we know if we make the move out to Calgary in the next week or so, that we’ll at least be guaranteeing ourselves a tour season up until Christmas,” he said.

The event postponement drew the ire of Saskatoon’s Colton Flasch, who’s skipping a new team this season after his departure from Team Kevin Koe.

I understand we are in unprecedented times and I do understand the seriousness of what’s going on. It is just frustrating when we are told one thing and then the next day rules are changed. There is no consistency within the rules.

Flasch said he was frustrated with the “lack of consistency within our government” and “the control they have over us.”

“All I know as of now is they changed their minds on how many people are allowed at curling events,” he said via text. “It was 10 per sheet and then all of a sudden they let us know the night before the event we cannot have more than 50 people.

Dunstone won the provincial title last season and earned a bronze medal at the Tim Hortons Brier. It wasn’t clear whether a relocation would affect his team’s ability to defend its title at the Feb. 3-7 SaskTel Tankard in Estevan, Sask.