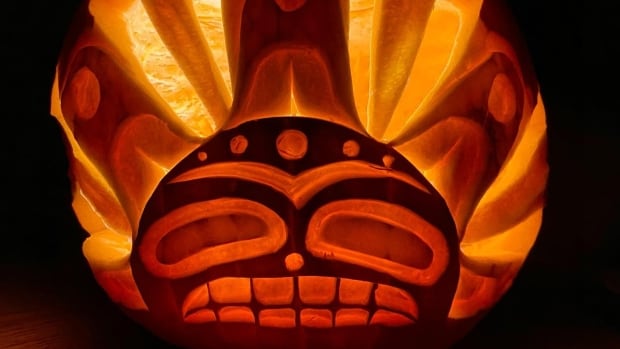 A jack-o’-lantern clad in a Seminole patchwork top and skirt, beaded earrings, and a nickel necklace was Cheyenne Kippenberger’s idea of giving the Halloween tradition a dash of Indigenous representation this year.

“As Indigenous people, instead of waiting for the representation we would like and deserve, we just give it to ourselves in any way we can,” said Kippenberger.

The reigning 2019-2021 Miss Indian World, a cultural goodwill ambassador of the Gathering of Nations powwow, is a member of the Seminole Tribe of Florida.

Her community, the Hollywood Reservation, has a restriction on gatherings due to the COVID-19 pandemic but moved its annual pumpkin carving contest online. It’s the first year that Kippenberger has participated.

“Whether it’s Valentine’s Day, Halloween or Christmas — we always find a way to Indigenize it,” she said.

“Trying not to look into it so deeply, it’s just something that comes out of our type of humour. I think we definitely carry that into these mainstream holidays. No matter where you put us, we’re still going to be us and put a little bit of who we are into it.”

She’s not the only one who has been carving and decorating pumpkins with Indigenous art and culture in mind.

Michelle Stoney has been carving pumpkins using the formline art style of the northwest for a number of years. This year’s pumpkin features a sun after a call out on Instagram for inspiration.

‘We make pumpkins every year with my sister and brother. We always go over the top, so this year I put it out to my Instagram followers and one just stood out to me because it was a design I did as a commission a while ago,” she said.

The Gitxsan artist from Gitanmaax, B.C., grew up around Gitxsan art, often watching her grandfather work as a master carver. She recently released a colouring book, and has some free designs available through social media.

“Throughout all of COVID and through my art practice, I’ve included Indigenous formline and artwork in everyday things,” said Stoney.

“I just love how everyone is connecting with it and sharing it. I know it’s a sun and it’s bright, so that’s kind of funny, but I never knew it would spread this far and get everyone excited about being Indigenous and proud. I think we as Indigenous people are just proud of everything we do.”

Warrior sculptures that stand at the entrance of the Blackfeet reservation in Montana were the source of inspiration for a pumpkin Mariah Gladstone carved this week.

Made by artist Jay Laber, the sculptures were created using scrap metal. The view Gladstone carved is looking at the community coming down from the Canadian border with the backdrop of Chief Mountain, a sacred spot for the Blackfeet.

“I wanted to translate a scene that, especially for people around here, is really recognizable. But also, as Indigenous foods, pumpkins need Indigenous designs,” said Gladstone.