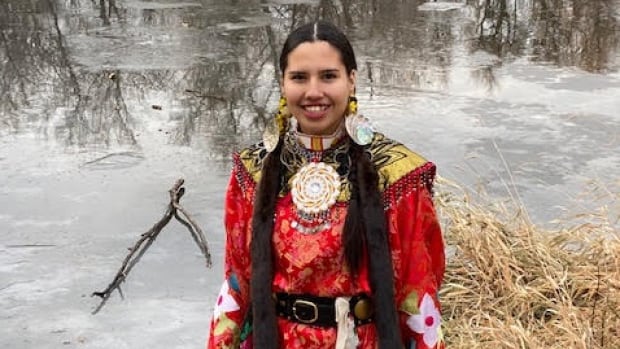 Michelle Chubb dances in a jingle dress on top of a Winnipeg parkade — a throwback to her childhood powwows — but today the video carries a lot of star power for her more than 300,000 TikTok followers.

The 22-year-old Winnipeg woman was profiled this week in Teen Vogue for her activism, educational content and ability to blend her traditional Cree culture with elements from pop culture on the popular social media platform.

“I just want to spread awareness for Indigenous people and their problems,” said Chubb, who is a member of Bunibonibee Cree Nation, also known as Oxford House, a community of about 3,000 people roughly 575 kilometres north of Winnipeg.

In her TikTok videos, Chubb is honest about the racism and trauma she’s faced, but also proudly displays the stunning elements of her culture, such as her regalia, beaded jewelry and dancing, set to either traditional round dance and powwow music or Top 40 hits.

Her goal is simple — to inspire young people and to help bridge the gap.

Michelle Chubb talks about the challenges she’s faced on her way to becoming a social media star and fashion magazine feature subject. 2:28

“We do need help and allies. Growing up it was really hard for me; I want to be that mentor for others who are lost on their path right now.”

Her videos are beautiful and display her confidence, but Chubb has faced plenty of adversity and desolation, which began early, growing up in Winnipeg.

“I went through a lot of racism with going to school … a lot of teachers thought … thought unlikely of me. Some of them, not all,” she said.

“Some would belittle me, some would underestimate my smart skills which was pretty sad.”

Her grandfather, William McKay, was her rock, bringing her family to Pimicikamak, a Cree community about 500 km northwest of Winnipeg.

Her fondest memories are of being there together with family, taking part in ceremonies, eating traditional foods and hearing the stories, but it wasn’t always easier, especially with her peers.

“City natives also get pushed away from the rez because we didn’t grow up with them. With their culture and the traditional stuff, she said.

“That kind of sucks too when you’re like in the middle of racism and not being Native enough.”

She credits her grandfather for helping to set her on the right path in spite of that. In bringing her and her siblings to powwows across Manitoba and teaching them about the traditional and spiritual world, she said he was both her mentor and saviour.

“He was a man to look up to. He was a fighter,” she said proudly.

“Things kind of just sort of fell down from there.”

Chubb said she stopped dancing and ‘lost’ herself. She said she ‘manoeuvered’ her way through school without purpose, made and dropped friends, and after high-school started abusing drugs and alcohol.

About a year ago, her boyfriend took her to her first sweat lodge in many years, which she said helped give her a spiritual awakening and a “clean slate.” She’s now been sober for more than a year.

‘I just wanted to change the stereotypes’

“I didn’t want to be seen like that. I just wanted to change the stereotypes that are usually seen towards Natives,” she said.

She revisits what she’s been taught by her grandfather and culture on TikTok, the social media platform she joined a year ago because she noticed the app lacked Indigenous representation.

All the attention from media, friends and strangers has been unexpected.

“It’s really overwhelming. I’m not that type of person, I’m the shyest person you probably know. It’s really great, great responses, I like it … a lot of support.”

Chubb aspires now to become a model and to continue to mentor younger Indigenous people. She lost her grandfather, or her Nimosum as she called him in Cree, before her recovery, but doesn’t hesitate when asked what he’d think.

“I think he’d be proud,” she said, wiping tears.

“Growing up, I was always really underestimated.”