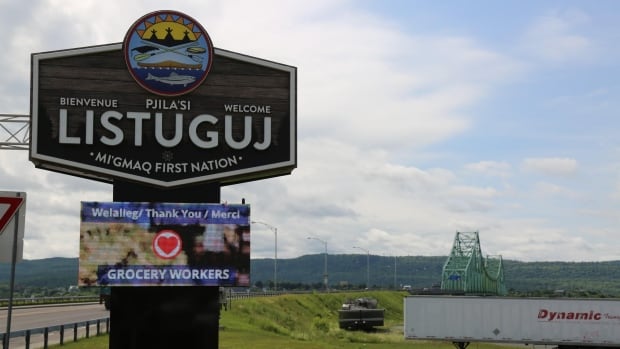 She got into her car with two of her cousins and drove across the J. C. Van Horne Bridge to get to Sugarloaf High School in Campbellton, New Brunswick.

“I didn’t go there to make trouble or disturb the peace in any way,” Metallic said. “I just wanted to go to school and learn like everybody else.”

Metallic, and around 100 other Mi’kmaw students from Listuguj normally attend school in Campbellton, a short drive across the Restigouche River.

But students were sent home on Oct. 8, after Quebec changed the agreement it had with New Brunswick.

That agreement had made Listuguj and Pointe-à-la-Croix part of the Atlantic bubble, allowing residents to travel across the border.

At the time, Quebec towns that were nearby but not part of the bubble complained it was unfair and that they were being forced to drive far away — into zones where COVID-19 cases were high — for supplies.

When the bubble burst, high school students were informed they could no longer go to the school. Since then, they have been doing online learning and attending class at the community centre in Listuguj instead.

Metallic said she’s afraid she’s falling behind and won’t get the credits she needs to graduate.

“It’s not working as well for me, it’s really not,” she said in an interview with CBC Quebec’s morning show, Quebec AM.

When Metallic pulled up to her school on Tuesday morning, peace officers told her if she didn’t turn back, she could be charged with obstruction, and face a criminal record and a $10,000 fine.

At that point, she was on the phone with her mother Donna Metallic, who suggested she turn around because she had made her point.

“I believe she has a right to stand up for her rights as a young student. And I’m proud of her for doing so,” Metallic said.

Generations of children in Listuguj have attended elementary and high school in Campbellton.

Many families live on either side of the border, and the economic ties are strong. Donna Metallic said she was hurt when she heard Listuguj students were no longer welcome.

“Because it looks as if it’s racial. I know a lot of people will say it’s not, but it looks that way to us and it made us feel that way,” she said.

“Why are kids being segregated again? For their education, they deserve the equal education as the children in New Brunswick.”

Other students have been speaking out about the situation.

Hannah Vicaire recently told CBC she can’t understand why she is allowed to enter New Brunswick to go work at the local Dairy Queen, but not to attend school.

“I’ve never had any problems getting across (to get to work),” said Vicaire. Quebecers who need to enter New Brunswick for essential reasons, like work, can be granted an exemption.

Vicaire argues that should apply to education as well.

“We let them go across to work at a fast-food restaurant, but not to pursue their education,” Roy said.

Vicaire also feels bad for younger students who were attending the high school for the first time.

“It’s kind of a big slap in the face for all of us, because we want the school year we’ve all been thinking of and been wanting.”

Ariel Metallic said many students are losing their motivation. She’s afraid she won’t have all the credits she needs to graduate.

“I can’t go see a teacher after class,” to ask questions, she said.

Provinces blame each other

New Brunswick Education Minister Dominic Cardy said Campbellton is ready “to take students back tomorrow morning,” if Quebec reinstates the checkpoint at the entrance of Listuguj and Pointe-à-la-Croix, near Highway 132, to control the risk of COVID-19 infections.

Cardy said by taking down the checkpoint, the Quebec government “is putting the needs of a tiny number of people above the needs of kids in this first nation to get educated.”

“We had a deal. The deal was working. The government of Quebec backed out,” he said.

“They want to recreate the bubble and maintain out-of-province control on the region, and are using the Indigenous population as a currency,” Roy said.

Premier François Legault’s office responded in an email that talks are continuing with New Brunswick.

Education Minister Jean-François Roberge was not available for comment on Wednesday.