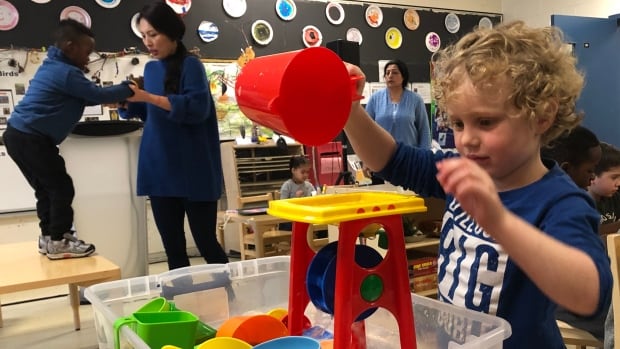 Each school day, streams of kids come through the doors of Se’t A’newey Kina’matino’kuom, like any other school in Newfoundland and Labrador.

But some of the arrivals aren’t yet out of diapers. Others are far from mastering the art of tying shoelaces.

That’s because Se’t A’newey not only serves the pre-K to Grade 12 students of Miawpukek First Nation on the island’s south coast, but includes a daycare inside its building for children as young as two.

“When parents come to school to drop out off their school-age kids, they actually drop off their daycare kids. So the daycare kids feel proud that they’re actually going to the big school like their older siblings,” said Jackie John, the co-ordinator of Four Winds Child Care.

The combined model came into being in 2017, when a new school was built and opened in the community. Prior to that, Four Winds operated out of a church basement, and John said the change to a bright, new space with outdoor activities, cultural programming and — COVID-19 restrictions aside — integration with some larger school activities and assemblies have kept the daycare’s children busy and set the basis for their formal education.

Se’t A’newey is an outlier in the province, since as a First Nation reserve, Miawpukek’s school system falls outside the Newfoundland and Labrador English School District, giving it more freedom to innovate.

There are a few other scattered private daycares operating within provincial schools; the Department of Education counts nine such programs. But one early childhood education advocate says if a proposal more than 10 years ago brought to the provincial government had been realized, combining kids of all ages into one building could have been the rule rather than the exception, and based on its success elsewhere in Canada, the idea still warrants a second look.

David Philpott wore a few hats back in 2010, including one as research chair for the Jimmy Pratt Foundation, a St. John’s non-profit group that lobbies for improvements to the province’s daycare system. He was part of a team that pitched an idea, with an offer to split funding on it, to the Department of Education: two pilot schools in the province to extend their offerings and include free childcare inside the school system, run by the school system.

The idea was already in action in Ontario, and being developed in the Maritimes. But Philpott said his group encountered reluctance, despite the spending flush of the Danny Williams era, and as talks dragged on the idea was eventually killed when the Progressive Conservatives were voted out in 2015.

“The Conservative government at the time were afraid of success,” said Philpott, who is also a retired professor of education at Memorial University.

“This model was working so well in other regions that the demand for it was growing, and parents and educators were recognizing the importance of using and repurposing the neighborhood school to meet the needs of young families.”

What works so well, said Philpott, is the idea of a school building serving all ages, and a bigger community as a result. When babies and toddlers come into the school system, at-risk behaviours or special needs can be identified earlier and better, he said, and the transition to kindergarten is easier. Parents too get a break from multiple drop-offs, get to know teachers and become more hands-on, he said.

“All of that is done well before kindergarten starts. There’s a familiarity built up, and there’s a mutual respect established. So it’s a win-win situation for everyone,” Philpott said.

That what-could-have-been has dogged Philpott as he has watched other provinces leapfrog ahead in extending school systems to include younger and younger children. Toronto spearheaded including toddlers in some of its schools in the early 2000s, and by 2020, 54 per cent of Ontario’s child-care centres were in public schools, according to statistics from its provincial Education Department.

On the East Coast, Nova Scotia piloted four early years centres within elementary schools in 2014, that among other things offered free programming to children the year before they entered kindergarten. That plan has since expanded, and alongside that junior kindergarten has been phased in, and expanded to every Nova Scotian public school this past September.

“The trend across the world now is to allow early learning with primary elementary education, so we have a continuum of learning. A one-stop shop for all of these families,” Philpott said.

Philpott took another stab at influencing the provincial government in 2017, when he and other members of an education task force handed in their final report to Dwight Ball’s Liberals with recommendations for the future of N.L. schools, including bringing in junior kindergarten.

The report noted an abundance of space: in that year, 62 schools in the province had fewer than 15 four- and five-year-olds in them. Thirty of those schools had less than five such kindergarten students.

All but a handful of those schools were located outside the province’s population hotspot, the Avalon Peninsula, matching the continued demographic slide of rural communities. Many of those rural places also lack formal daycares, and in that void Philpott sees empty classrooms as opportunities.

“The No. 1 issue facing many rural Newfoundland communities is the viability of the school, keeping the school open, and having enough children to warrant the school,” said Philpott.

“If we start reconceptualizing what we mean by ‘school,’ these buildings and these sites become more stable, and families have more options.”

While the provincial government’s finances have tumbled dramatically since the Williams era, Philpott echoed what other research has illustrated: that investments in early childhood education are money-savers down the line, by helping lift children out of poverty and giving parents better flexibility to work.

In Miawpukek, there are no regrets from John for their move into Se’t A’newey.

“From my perspective, working with staff, parents and children, there are no drawbacks to having the daycare in the school. I find it’s only positives,” said John.

The 2017 task force report pushed for junior kindergarten to be phased in across the province, a plan that in November 2019 Education Minister Brian Warr said was “progressing.”

“It largely got sidelined as a result of the pandemic,” said Education Minister Tom Osborne.

His department has resumed some work on junior kindergarten — which requires the time-consuming task of changing legislation — but Osborne said as long as the virus is around, the province won’t be looking to phase it in.

“It’s certainly not something that we were looking at adding another layer of complexity this year, but I can tell you that junior kindergarten is on the radar and it is something that the department is still focused on,” Osborne said.

Likewise, he said, while he’s interested in adding more private daycares to schools, Osborne won’t consider that until after the pandemic.

Despite the lack of concrete milestones, Philpott is optimistic that it will happen, buoyed along by early childhood investments such as the $25-a-day daycare initiative that became a reality Jan. 1.

Philpott remembers being berated from all angles as he championed full-day kindergarten, which arrived amid controversy in 2016 in Newfoundland and Labrador, the last Atlantic province to implement it. But after it started, the roar of criticism turned into crickets, he said, and since floating the junior kindergarten idea he’s seen an appetite develop for more early education.

“Taking the four-year-old out of early years programming and putting them in schools makes sense. It stabilizes the early years centres. It stabilizes a good school start for children, and the education outcomes are significant,” he said.