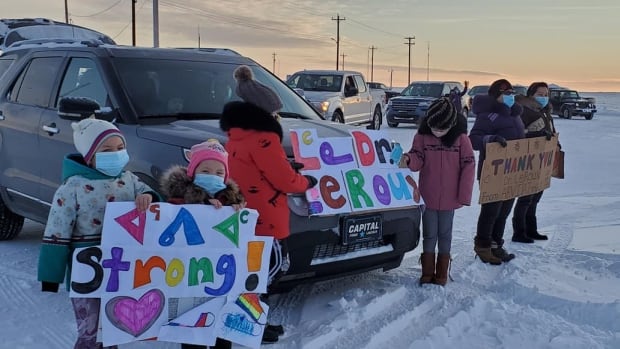 A locum doctor who worked in Arviat, Nunavut, through an outbreak of COVID-19 got a big send-off recently, when local residents organized a show of appreciation as he headed home to B.C.

Jessie Kaludjak of Arviat says Dr. Carl Le Roux means a lot to the community because he didn’t want to leave them during the crisis. Le Roux stayed in Arviat for weeks longer than his normal rotation.

“Even though it was so close to the holidays, he decided to stay in Arviat when COVID[-19] first came here,” she said.

Kaludjak has a lung condition called chronic obstructive pulmonary disease (COPD) and asthma. So when the COVID-19 outbreak hit her community, she was frightened she would catch it.

“Would I be able to survive it? And with all the prayers and by God’s grace … even though it even came into my house, it didn’t touch me”, Kaludjak said with emotion.

One member out of seven in her household caught COVID-19. And so did more than 200 people in the hamlet of less than 3,000.

Arviat was put on lockdown on Dec. 2, when it was determined there was community transmission of the deadly virus. On Tuesday, the territory began easing public health measures in Arviat after no new case had been reported over the past two weeks.

Kaludjak says as soon as it was discovered a family member was carrying the virus, they started using masks in her home. For the duration of the lockdown, the household never ate together nor gathered in the living room. They only left their rooms to use the washroom or to take a shower. They ate at different times, sanitized whatever they touched, and everyone did their own laundry. The family also stayed under quarantine an extra two weeks to make sure they didn’t
carry the virus.

Still, despite what was happening in her home and community, Kaludjak felt reassured that she was still being cared for. She credits Arviat’s medical team, including Le Roux.

“It was really scary, and receiving calls from the health centre and from the doctors to see how I was, and I know he [Le Roux] called a lot of people … it really helped to calm the nerves.”

According to Le Roux’s assistant in Arviat, Brenda Komakjuak, the Vancouver doctor works in Nunavut for five weeks on rotation and has treated patients in Arviat before.

Komakjuak says at the end of October, Le Roux had cancelled his flight home for the holidays and spent not only Christmas and New Year’s in Arviat, but also his birthday — a month and a half longer than expected.

When Komakjuak told Kaludjak that Dr. Le Roux was extending his stay, she said that gave the people of Arviat hope and courage to get through the outbreak.

“He could have easily gone home to rest and come back later, but he decided to stay until there were absolutely no more cases. And that he did!” Kaludjak said.

She’s relieved that the outbreak in her community is over.

“Big weight lifted off, we could sleep [again],” she said, throwing her arms in the air.

“For a big community like this with a lot of overcrowding, that’s a miracle that we’re down to zero cases. I’m so proud of Arviamiut.”

In appreciation for Le Roux, Kaludjak organized a drive-by last Friday before he boarded a flight home. She counted just over 30 vehicles that took part in the parade to the airport, honking their horns in appreciation. Some people made signs as a way to deliver their message of thanks to the doctor, who stood outside and waved to each and every person who stopped to wave goodbye.

“He was so thankful and grateful that we held a drive-by thank-you for him,” Kaludjak says.

“I thought, if we show our appreciation, they will work that much further and help us that much more. Because … don’t we all?”