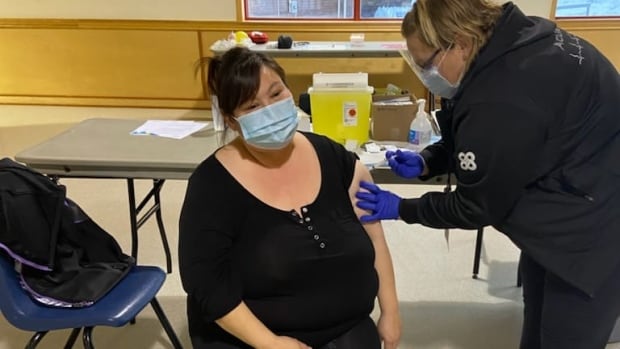 Some of the first recipients of the COVID-19 vaccine in the southern N.W.T. are reminding residents that it will help them stay safe.

The statements come as the government found an undetected COVID-19 result in Hay River’s wastewater earlier this week.

Vaccine clinics popped up in three of the smaller South Slave communities this week: K’atl’odeeche First Nation, Enterprise and Kakisa.

‘I’m going to do it for my community’

April Martel, chief of K’atl’odeeche First Nation, was one of the first people in line for the Moderna vaccine on Wednesday.

For a few days before the clinic, Martel had gone door-to-door with a translator, sharing vaccination information with elders in her community.

Still, she got nervous as soon as she walked through the doors of the Chief Lamalice Complex with a team of nurses.

“I was so excited to get it, but at the same time I was scared,” Martel told CBC.

She said she was reluctant at first because she knew it was a new type of vaccine, and didn’t know how her body would react to it. She was convinced after seeing a long lineup of elders behind her, waiting for their dose.

“I felt a little bit better, knowing that [the elders] are getting the vaccine,” she said. “They’re doing it for their community, so I was like I’m going to do it for my community.”

Martel said more than 100 people got the first dose of the vaccine that day.

There were more who wanted to take it, she continued, but had to be turned away because they were sick or recently got the flu vaccine.

A few hours after being vaccinated, Martel’s phone rang.

It was Dr. Kami Kandola, the N.W.T.’s chief public health officer, calling to let her know that there was a positive COVID-19 result in Hay River’s wastewater system.

After posting the news on the nation’s Facebook page, Martel said more people decided to head to the community centre to get their vaccine.

For those who didn’t make it, they’ll be able to go back again in 28 days to get their vaccine.

If they decide not to at that time, Martel said, she will still respect their choice — but she wants people to be comfortable knowing that elders in the community are getting the vaccine.

“People were happy [Wednesday], so I just want to share that with people,” she said.

‘It’s the smart thing to do’

Enterprise resident Jim Dives was flagged down Thursday morning by a team of nurses looking for the community centre.

Dives took them to the right place and helped them carry some of their medical supplies through the door. In the small hamlet of 130 people, appointments for the Moderna vaccine are first-come-first-serve.

Dives describes himself as over 70, a little overweight and diabetic — all factors increasing his risk of contracting COVID-19 so he had “no qualms” getting the vaccine.

“I think it’s the smart thing to do,” Dives said. “I think the Northwest Territories is primed to have a large outbreak and … getting the vaccine is the easiest way to protect everybody.”

On his way out, Dives said he saw about 15 to 20 people waiting for their turn to get it.

Enterprise has a large population of seniors, Dives said. He believes most people in the hamlet will be open to getting the vaccine.

“The more people that get the vaccine, the better off we’re going to be down the road because that’s the only way to stop this thing,” Dives said.

Dives said he will continue to wear his mask, wash his hands and limit his gatherings even after getting the vaccine to minimize his risk as much as possible.