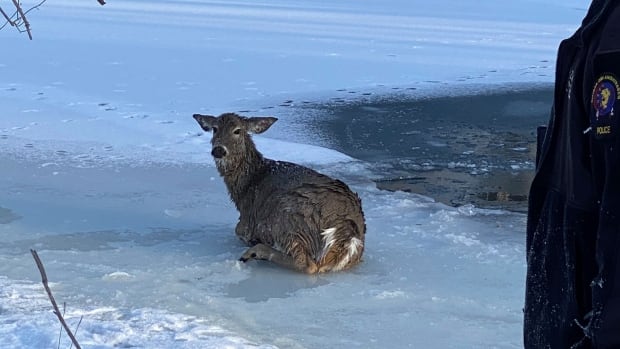 After rescuing a deer that had fallen through ice this week, officers with the Kitigan Zibi Police are stressing the importance of winter safety.

“If animals are falling through, people should be cautious and stay off thin ice. It’s definitely not a cold enough year to be doing activities on the ice,” said Const. Hayden Commando.

Commando and officer Justin Petonoquot were responding to a call when they spotted a deer struggling to get out of a creek in the Algonquin community, which is located about 120 kilometres north of Ottawa.

“Believe it or not, it’s not the first time I pulled a deer out of the river,” said Commando.

He formed a lasso with a throw bag. He said after about 50 times throwing the lasso at the deer, he managed to get it around the animal’s neck and pulled it to shore.

“It’s a lot easier to save a person who can grab onto the rope and be pulled out. The animal was trying to get away in fear of people,” said Commando.

They suspect the animal was trapped in the water for a while as icicles had formed on its face and fur.

“It was a good little change compared to the calls we’ve been dealing with, and a positive outcome too. It lifted everyone’s spirit to move on with our day.”

Petonoquot said it’s in their nature as community police officers to help animals in distress.

“We’re First Nations people and are taught to be respectful to the animals. Just think about the fact that it could be a human being that’s in the water,” said Petonoquot.

“The water was obviously very cold. You could tell the animal was in distress and was scared. I felt that I needed to help the animal. I couldn’t just leave him there.”