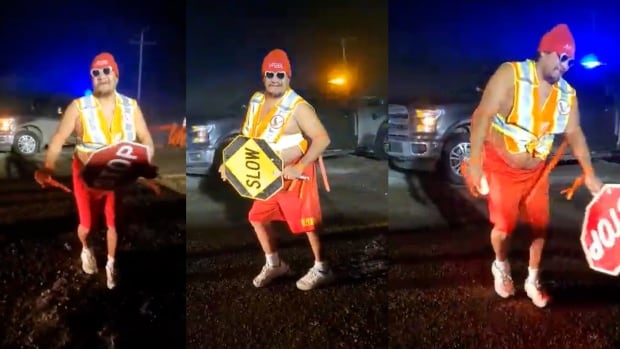 On a January night at the COVID-19 security check stop on the edge of Kahkewistahaw First Nation, Mike Bitternose donned his red basketball shorts, an orange safety vest and his granddaughters’ sunglasses and started to dance.

Rod Stewart’s Da Ya Think I’m Sexy? blasted on a speaker as he danced toward the camera with a red handheld stop sign.

“I never, ever thought that I would do something like it,” Bitternose said with a laugh. “The outfit that I had on was just a spur of the moment thing.”

Bitternose was taking part in the #RezSecurityChallenge. The challenge is meant to inspire people working at check stops to dance and share some positivity.

He said he originally saw another participant doing the challenge and jokingly said he’d take part. He almost backed down, but went for it.

“If it ever came down to it, I would do something like it again,” Bitternose said. “I can’t save the whole world. But I can be there for my team. Always be there from my team day and night.”

Bitternose is originally from the George Gordon First Nation, but is doing security at the Kahkewistahaw First Nation, located about 150 kilometres east of Regina. He apologized for not wearing a mask in the video and said he does wear one usually, and always when working security.

He said the pandemic has not been easy for First Nations and he wanted to do something to lift up his security team.

“It’s not getting any easier with this, with everything, it’s a challenge. A lot of our elderly people are really facing it in the hardest of times,” Bitternose said. “There’s thousands and thousands of people dying every day, every night. And it’s something that we have to recognize as a nation.”

He said it’s hard for people to stay at home and follow the curfew order, but it’s necessary to protect people.

After his now-viral video and the song ended, jigging music blasted from the speakers. Six other security members joined in for a jigging dance.

Bitternose said he didn’t expect the video to go as far as it has and that the experience has been unreal.

We need laughter. As Indigenous people, we believe that laughing is our medicine.– Shauna Taypotat

Shayna Taypotat is one of the people who videotaped the dancing. She’s also a security worker at the check stop. She said this was something they wanted to do as a group because their reserve was going through a lot.

“There’s a lot of tragedies and things going on here and so we’re kind of having a hard time. So we decided just to do it because we need laughter. As Indigenous people, we believe that laughing is our medicine,” she said.

The community recently lost one of its members, a 52-year-old previously healthy man, to COVID-19. In a social media post, Chief Evan Taypotat said the man was exposed at a housewarming party.

In the post, the chief said that as of Jan. 12 there were 14 active cases on the First Nation and 30 pending tests.

Shayna Taypotat said the death left a dark feeling in the community.

Even with everything going on, Shayna said little moments of joy make it easier to get through. She said she also hopes it helps the community appreciate what the security guards do. She said people don’t usually like being asked the COVID screening questions, but it’s simply to keep them safe.

Bitternose said other security groups should join in and issued a challenge to other dancers:

“I will do another challenge if you can beat this one.”

CBC Saskatchewan wants to hear how the COVID-19 pandemic has impacted you. Share your story with our online questionnaire.