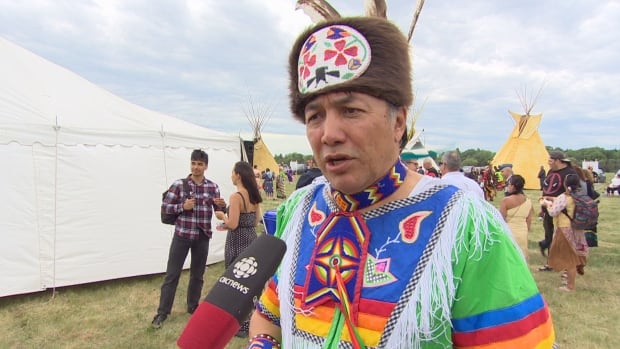 The chiefs and elders of Treaty 1 are calling on their communities’ youth to help name their planned urban reserve in Winnipeg, known previously as the Kapyong Barracks.

The naming contest is being put on by the Treaty 1 Development Corporation, led by the seven chiefs of the Treaty 1 reserves: Brokenhead, Long Plain, Peguis, Roseau River, Sagkeeng, Sandy Bay and Swan Lake First Nations.

All Treaty 1 community members are eligible to enter but there is a special category for youth 18 and under. The winner receives $500.

Meeches said it was the Treaty 1 elders and knowledge keepers who wanted to get youth involved in the naming.

“They might come up with a name that represents maybe the Anishinaabe language, or an Anishinaabe name… But they’re basically leaving it up to the knowledge keepers to give that advice and recommendation,” said Meeches.

The re-development of the site will include commercial and residential buildings, housing, a sports complex, a possible hotel and a war museum to honour the history of the site.

The site west of Kenaston Boulevard at Grant Avenue, bordering the Tuxedo and River Heights neighbourhoods, was abandoned in 2004 when the 2nd Battalion, Princess Patricia’s Canadian Light Infantry was moved to Canadian Forces Base Shilo, near Brandon, Man.

The Canadian Forces then declared the site surplus, and the federal Treasury Board tried to sell it to a Crown corporation. That decision was challenged in court by the group of Treaty 1 First Nations, who argued outstanding Treaty Land Entitlement claims meant they had a right to the site. An agreement in principle was signed in 2018 to turn the land into an urban reserve.

Meeches said the pandemic has slowed down some of the progress on the urban reserve, and that he would like to see the lands acquire official urban reserve status before Aug. 3, the 150th anniversary of Treaty 1.