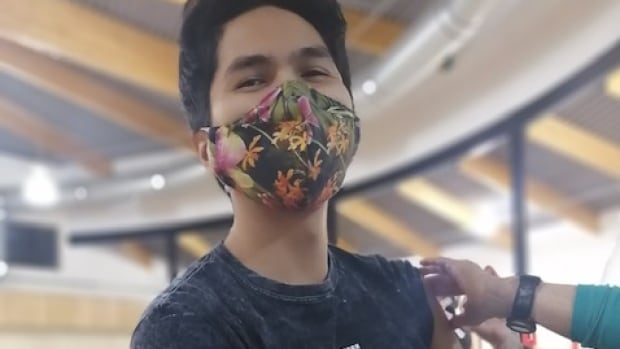 “As a community, we’re just very thankful, and we really appreciate being put at the front of the line,” said Mayor Chris Irvin, who was the second person to get the Moderna shot on Monday.

Irvin said he experienced no side effects, and that he felt “great.”

“I almost felt like it was a bit euphoric, honestly, just because it’s kind of a light at the end of the tunnel. The tunnel is long and dark, we don’t know where the end of it is, but there is a light.”

Two mobile vaccination teams will spend the coming weeks travelling across the territory to provide the Moderna vaccine. They bring everything they need with them — including tables, metal folding chairs and even their own sink.

Stephen Charlie, chief of the Liard First Nation in Watson Lake, was first in line for a shot on Monday. He says the First Nation has been urging citizens to get the shot.

“Well, I think some individuals are really excited about it, the opportunity to combat the virus,” he said.

“We’ve been going door to door. We’ve been having the resources available to our health team from Liard First Nation getting the word out and offering rides to the individuals that would like to go to the to the clinic.”

Under Yukon’s vaccine strategy, priority is given to people living in long term care homes and shelters, health care workers, people over the age of 70 and residents of remote or rural communities, including First Nations citizens.

The territory is expecting enough doses to vaccinate about 75 per cent of the adult population in the territory, between now and March.

After Watson Lake, mobile vaccine clinics will be set up this week in Old Crow and Beaver Creek. Appointments can be booked on the government’s website.

‘A lot of apprehension’

Charlie says hundreds of people registered ahead of time for the Watson Lake clinic. But he says some in his community are still reluctant to get the shot.

Doris Bill, chief of the Kwanlin Dun First Nation in Whitehorse, agrees. This week, she posted a video online, urging citizens to get informed about the vaccine.

“I see it online all the time. And I see people talking about the vaccine and the information that they have is just not accurate,” she said.

She says there is still some “unease” about how new the vaccine is, and that some people have suggested those at the front of the line are like “guinea pigs.”

“You try and assure people that things are going to be OK and that, you know, we’re doing this to protect our community,” Bill said.