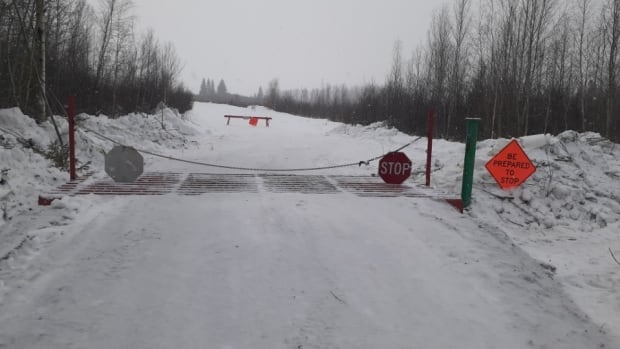 Contractors are working to build up the winter ice road to Fort Chipewyan, after it was closed earlier in January due to safety concerns.

The closure happened after warm weather caused problems with the ice thickness over two sections of the Des Rocher River crossings.

The Regional Municipality of Wood Buffalo announced on Thursday it was sending out a specialized contractor to rebuild the crossings.

Coun. Bruce Inglis said the weather this January has been unusual and the community is even seeing large swaths of uncovered ice on Lake Athabasca.

“That is not the least bit normal,” said Inglis. “We should just be seeing ice and snow.”

Inglis said the community is adaptable and residents understand the challenges faced with the road this year.

The road is used by many to get groceries, visit family or go to medical appointments in Fort McMurray. One of the main concerns for the community is fuel supply. Every year hundreds of trucks travel along the road to bring in fuel for electricity, cars and heating homes.

“We know our supply is OK at the moment, but we’re very much focused on that,” said Inglis.

Inglis added there’s a visual reminder about the importance of winter road safety — a truck that went off the side of the road. The driver was able to escape the vehicle in time.

“It’s just barely sticking out of the river,” said Inglis

“It’s a big reminder to people, how tenuous this could be.”

Mikisew Cree First Nation Chief Peter Powder said people are still able to get in and out of the community by plane. He said leadership has been keeping a close eye on the fuel situation.

“We’re OK right now. We’re not in panic mode,” said Powder. “We’re just being proactive and making sure that we have a good picture of what we have for our community.”

He estimated that the community likely has four to six weeks of fuel stocked in town.

“Sure we depend on it, but we want safety,” said Rigney. She pointed to the truck sticking out of the water.

“That’s the kind of things you have to worry about.”

Rigney noted in Dene January is called “cold month,” but the weather is different this year.

“It’s not cold. It’s been very mild. Too mild for the winter road,” said Rigney. She added that she doesn’t want to travel at this time because of COVID-19.

“Let’s face it, we are in the 21st century… why isn’t there an all-weather road to Fort Chip?” said Adam.

Adam said the trouble with the winter road is “putting the community in jeopardy.”

In 1998, the winter road was temporarily closed because the ice crossings couldn’t support vehicle traffic, according to the Regional Municipality of Wood Buffalo. As well, last year the municipality struggled with ice integrity for larger loads and brought in a specialized contractor to build ice.

The contractors are currently working on this year’s winter road and the goal is to have the road open in early February.