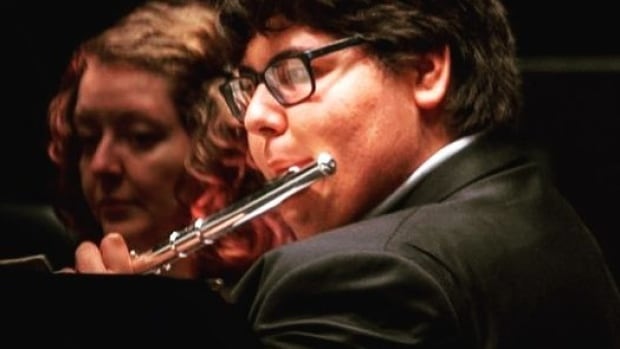 The 20-year-old flautist has been playing the flute for 11 years.

As a child, the sound of the flute caught his young ears while watching an orchestra performance on TV.

“I liked that it sort of carried over the rest of the orchestra,” Evans-Knott said.

“It was the most prominent thing I could pick out.”

He was self-taught for a couple of years before joining a band program at his school in Grade 7. He said he struggled to get a sound out of the instrument for the first three or four days but once he did, the rest came naturally.

His high school music teacher encouraged him to audition for the Kawartha Youth Orchestra (KYO). Founded in 2002, the KYO gives young musicians of the Kawartha region of Ontario the opportunity to learn symphonic music and perform in an orchestral ensemble.

He was accepted into the advanced program and was a member of the KYO for five years.

During his last year with the KYO, Evans-Knott won the senior Concerto Challenge, an opportunity to perform as a soloist during a larger orchestral work.

“He is a remarkable young man with a fabulous, fabulous talent,” said Maggie Goldsmith, president of the KYO.

“I think Tyler has been a really big part of our recruitment team, he’s been such an inspiring member of our organization.”

She said he’s been a mentor to other students over the years and also jumps in to cover parts for other wind instruments when needed.

Now that Evans-Knott’s time with the KYO has come to a close he’s begun planning his path to becoming a professional orchestra musician.

There are a few music schools in Toronto, such as the Royal Conservatory of Music, and universities that offer four-year music degree programs that he said he’s thinking about.

“It basically sets you up for a professional career and other things like teaching,” said Evans-Knott.

He hasn’t yet applied to any of the programs yet but is hoping to next year.

Evans-Knott auditioned for and won principal flute in the Toronto Symphony Youth Orchestra for the 2020-21 season.

“Tyler is a man of few words,” said his mother Janet Evans.

She said sometimes she will come home from work and he’ll tell her he’s practised for five hours.