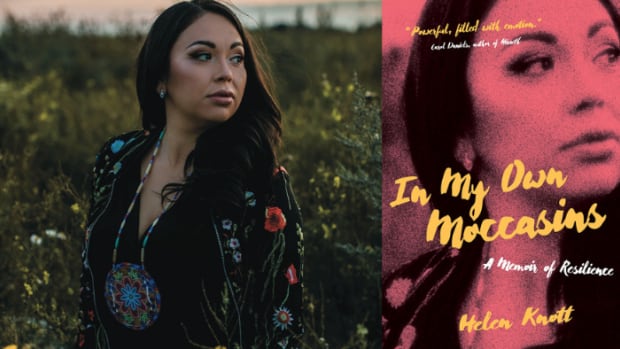 It’s not every day that authors drop by a local book club to chat about their work, but Helen Knott, a Dane Zaa and Cree writer based in Fort St. John in northern B.C., did just that last week — virtually, of course.

The author of In My Own Moccasins: A Memoir of Resilience popped into a book club session on Zoom attended by six women in Metro Vancouver’s Fort Langley who were discussing her book.

Many attendees were caught off guard by Knott’s unexpected visit 15 minutes before the session ended Tuesday evening.

“One woman kept her hands over her face in shock for the first bit, over her mouth, stunned,” she tweeted Tuesday. “One ate popcorn like, ‘oh, this is juicy.’ “

Knott says she received an email with the Zoom meeting link from book club member Jessica Kennedy who approached her on Instagram several hours before the start of the book discussion.

“She was just telling me, ‘We’re meeting tonight,’ ” Knott said to Sarah Penton, the host of CBC’s Radio West. “She mentioned that the book club has been their saving grace during the times of COVID, and at that moment I was like, ‘OK, can I join your book club? I just want to surprise everybody.’ “

“It was just this moment of excitement and happiness, and I was really grateful to be able to do that,” she said.

She added a positive connotation to Zoom-bombing which usually means an unwelcome intrusion into a video conference by someone who’s not invited.

The three-year-old Fort Langley book club has been holding sessions on Zoom since social gatherings outside families were banned under by public health orders.

Published in August 2019, In My Own Moccasins is an unflinching account of addiction, intergenerational trauma and the wounds brought on by sexual violence. It is also the story of sisterhood, the power of ceremony, the love of family and the possibility of redemption.

“Because it is a quite serious book, we had our laughter and then we got down to brass tacks and we talked about the writing process and … difficult material,” Knott said. “[I] talked about the relationship with my mom when I was younger … and how we worked on that to heal that over the years.”

Knott says she encouraged the book club members to ask her tough questions.

Knott says after her Zoom-bombing on Tuesday, a couple of other people invited her to join their book club meetings.

“I don’t know if it would be a surprise anymore,” the author said.

Tap the link below to hear Helen Knott’s interview on Radio West:

Helen Knott, author of In My Own Moccasins: A Memoir of Resilience, speaks to Sarah Penton. 6:16