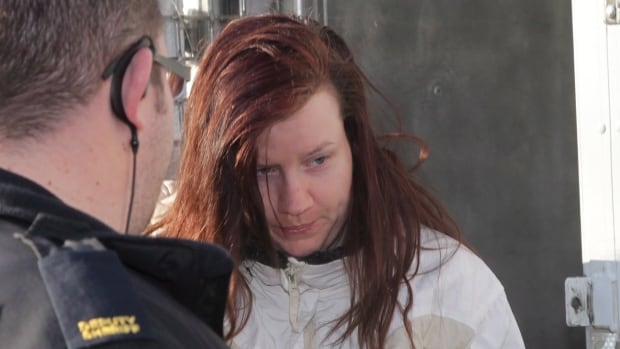 Henneberry pleaded guilty to second-degree murder in the February 2014 killing of Saunders, a 26-year-old Inuk woman from Labrador who was living in Halifax at the time of her death.

Henneberry’s then-boyfriend, Blake Leggette, pleaded guilty to first-degree murder in Saunders’s death and must serve a minimum of 25 years before he can begin applying for parole. The judge set Henneberry’s parole ineligibility at 10 years.

In an agreed statement of facts that accompanied their guilty pleas, court was told how Leggette and Henneberry murdered Saunders, rather than pay her the rent they owed for subletting her Halifax apartment.

Leggette and Henneberry then placed her body in a hockey bag and drove her car to Ontario, pausing in New Brunswick to leave her remains in a wooded area at the side of the road.

Police were able to track the pair to Ontario because they continued to use Saunders’s cellphone and car.

Henneberry’s time in custody has been marked by some controversy. She represented herself before the Nova Scotia Court of Appeal, trying to withdraw her guilty plea. She failed.

In 2020, Henneberry was granted temporary absences to attend the Healing of Seven Generations, a support program for Indigenous people.

But, as the parole board noted: “The victim’s family contacted Healing of Seven Generations who decided that due to the severity of your crime against the victim, an Inuk woman, you would be banned from accessing their services for the duration of your sentence.”

Henneberry told the board that her grandmother was an American Cherokee, but her claim has been questioned.

“You have no knowledge of where they resided or if any of your family members had any experience with the residential school system, the Sixties Scoop or a history of self harm or suicide,” the board noted following its Feb. 16 hearing.

“While there is file information that challenges the accuracy of your heritage, it appears to the Board that you have made a connection and derived benefit from your involvement in cultural and spiritual events and ceremonies.”

Henneberry has been granted temporary passes from prison, but she has been unable to take advantage because of COVID-19.

The board also noted that Henneberry has tried to diminish her role in the killing in the past.

“You stated that you now accept full responsibility and acknowledge that you played a significant role in the victim’s murder. You agreed that you taunted your co-accused, and your challenge to his masculinity was very much a contributing factor to his actions.”

The board said Henneberry expressed remorse numerous times during the hearing but showed no emotion in doing so. The board said that made it difficult to determine whether the remorse was sincere or self-serving.

Henneberry started serving her life sentence at the Nova Institute for Women in Truro, N.S.

But a verbal dispute with another inmate got her transferred to another prison in Ontario and classified as high security. She has since managed to work her security classification down to minimum.

“It is the Board’s opinion that you will present an undue risk to society if released. Further, your release will not contribute to the protection of society by facilitating your reintegration into society as a law-abiding citizen.”