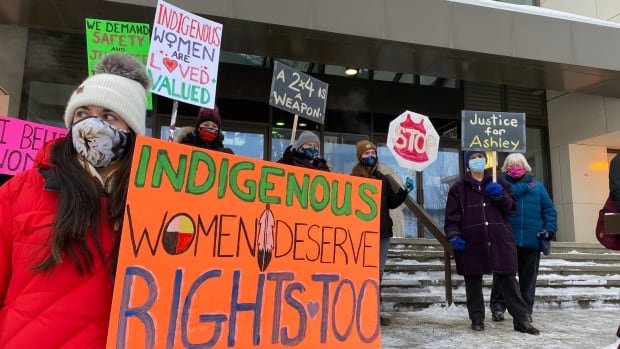 The man accused, David Kotchea of Watson Lake, was scheduled to be at a preliminary hearing for the case in territorial court on Monday.

CBC will follow the case it moves through the courts.

The Liard Aboriginal Women’s Society (LAWS) organized the rally in Watson Lake to show support for the alleged victim of the assault and to call for more protection of women in Yukon.

Heidi Marion of the Yukon Status of Women Council said the group was in Whitehorse to show support for the LAWS and for victims of violence.

“We have come to support Indigenous women in the territory and whole country by shining a light on the lack of justice,” said Marion.

“The legal system has to prosecute people, keep them accountable, and indeed keep them out of the communities.”

“I think it’s a sign of a systemic problem and we need to address the root causes of violence. All we can do today is show our support,” said the group’s executive director, Emilie Dory.

‘The justice system does not serve women’

Sasha Sywulsky was among those gathered outside the Whitehorse court building, holding a sign that read “Indigenous Women are Loved and Valued.”

She said the territory’s justice system is failing when it comes to protecting women from violence.

This includes protecting them from repeat offenders.

“The justice system does not serve women. It’s not designed to serve women. The onus is always on women to prove [their] credibility. You have to try so much harder in order to be believed in the justice system and to get justice. And that becomes even worse if you are a marginalized or an Indigenous woman,” Sywulsky said.

“To say that systemic racism is not present in the justice system is to be completely naive at this point,” she said.

Kaska citizens to march to draw attention to growing problem in Watson Lake. 11:39

“The convictions are not happening. We need more women to feel comfortable that the justice system will be just for them and hear their voices and have some action and consequence,” she said.

The Liard First Nation is preparing a community impact statement intended to “record the impact” of last summer’s alleged assault.

Such a document would be read to the court if it reaches a finding of guilt, before sentencing.

The statement from Magun’s family posted on Facebook by Michelle Hearty says, “we do not want this horrific brutal assault forgotten. We want justice served.”