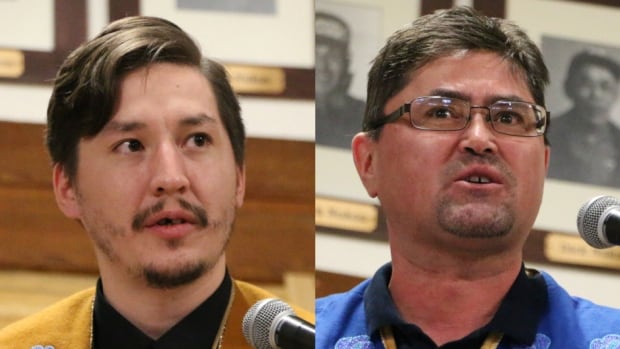 Chief Dana Tizya-Tramm remembers talking to the late Darius Elias in 2018, when the two men both ran for the leadership of the Vuntut Gwitchin First Nation.

Elias was already a seasoned politician at the time — he’d served as MLA for the Vuntut Gwitchin riding for 10 years — while Tizya-Tramm was, by comparison, relatively new to elected politics.

Still, Tizya-Tramm said there was never any sense of serious rivalry — he had too much respect for Elias.

“It took me a while to realize that, you know, I wasn’t running against anyone, but was running for government,” Tizya-Tramm recalled.

“And he was a part of that. And we were part of a leadership. And his vision also added to my own, and he expanded my mind and my heart as well.”

Elias, who went on after that election to become deputy chief of the First Nation, died last week. He was 48.

Death left a huge hole in his community

Tizya-Tramm says Elias’s death has left a huge hole in his community. He says Elias was “tenacious,” deeply knowledgeable about governance, and always motivated by a desire to move his community forward.

“He was not someone who wallowed in the negativity of a situation. He certainly would recognize difficulties, but he was very much a part of solutions,” Tizya-Tramm said.

Many others in Yukon have been paying tribute to Elias in recent days. Yukon Premier Sandy Silver and opposition Yukon Party Leader Currie Dixon both issued statements last week, and both described him as a passionate speaker and tireless advocate for his community.

Darrell Pasloski, who was Yukon premier when Elias crossed the floor of the Legislative Assembly in 2013 to join Pasloski’s Yukon Party, said in a tweet that he was honoured to have worked with Elias.

Deeply saddened by the passing of Darius Elias. Darius was a deeply caring person who loved his family &amp; community. Defender of caribou &amp; wildlife mgmt. A leader and proud of the many VGFN accomplishments. Kind, respectful. Honoured to have worked with him <a href=”https://twitter.com/hashtag/ytpoli?src=hash&amp;ref_src=twsrc%5Etfw”>#ytpoli</a>

Tizya-Tramm says it may take a while for his community to realize what they’ve lost in a leader like Elias. He had so much to offer, and would have been a valued elder, the chief says.

“I always knew that Darius was going to be a very important elder for our community, and elder for our agreements and our government — you know, he was there in the early days, sitting at the [negotiating] table with them.

“I can’t help but look to the future and our government, our people, our community lost an incredible touchstone.”

Tizya-Tramm says he wants to make sure that Elias is remembered for his leadership and his unwavering dedication to his community of Old Crow.

The chief says he’ll also cherish his own memories of Elias, including the laughter they often shared. He said Elias had an “uncanny ability to make everyone laugh.”

“I mean, he could be as serious as the rest of them sitting down at the table. And sometimes we would catch each other’s eye and he’d give me that look and I knew that he had a joke just brimming on the surface, and he would often break a lot of the tensions by just having everyone erupt in laughter.

“Darius made me a better leader and a better person … he’s embedded himself in my heart and in my being. And I’ll always carry him with me and I’ll always be thinking about him.”