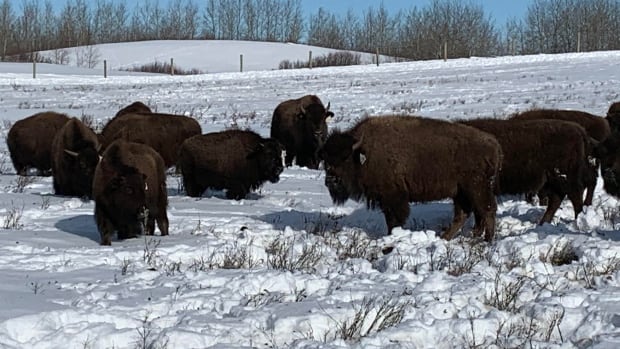 For the first time in over a century, plains bison are roaming on Poundmaker Cree Nation territory in Saskatchewan again.

Last Friday community members gathered as a herd of 20 bison were released into a compound.

“It was very heartfelt, knowing the importance and significance of the buffalo in traditional and current times,” said Jojo Tootoosis, a member of the Poundmaker Cree Nation, about 225 kilometres northwest of Saskatoon.

“They tie us to our spirit and to our history and our future.”

Tootoosis witnessed the release of the bison from the trailer into the 16-hectare compound they will call home.

“Any human who can feel the power of those buffalo running is deeply connected to this land, to life and to themselves,” said Tootoosis.

A herd of 20 animals released last week is believed to be first bison on Poundmaker Cree territory in 150 years. 1:01

“It just blew me away,” said Favel of the bison release.

Favel said there are approximately 1,500 pure plains bison in the wild in Canada when millions used to roam free across the Prairies. Plains bison are differentiated from wood bison by a shorter neck, rounder hump, frizzy hair on its head and a larger beard. The bison acquired by Battle River Bison Preservation have a pure bloodline and have not been interbred with cattle.

Favel said it’s been 150 years since plains bison have roamed the territory.

This herd is a mix of calves of both sexes and female yearlings provided by Parks Canada from Elk Island National Park, 40 kilometres east of Edmonton, which has played an integral role in the conservation of plains and wood bison in Canada. Battle River Bison Preservation in turn gifted the herd to the Poundmaker Cree Nation.

Poundmaker members held a ceremony with traditional songs and prayers as the bison ran through the snow.

He said the Cree have great reverence for bison which are spiritually significant and also were used for food and clothing.

While the bison populations in Canada suffered immense loss over the last century, Antoine said they’ve remained in their prayers.

“There are lots of kids that are going to remember Friday’s date watching the buffalo go back to our home territory,” he said.

In about a month Battle River Bison Preservation is hoping to add 10 more bison to the herd and eventually expand the compound to approximately 240 hectares in the future.