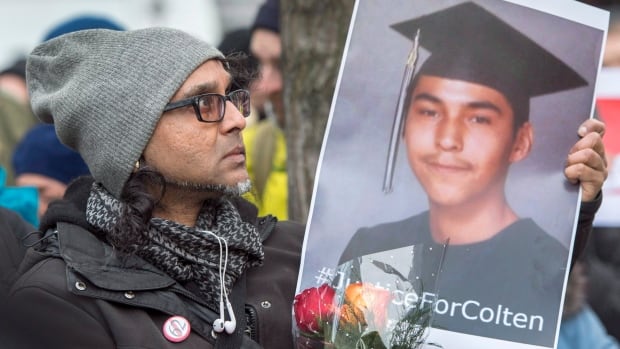 The results of an independent probe into how the Saskatchewan RCMP handled its investigation of the Colten Boushie shooting is finally poised for release next month, after a three-year wait.

Boushie, 22, was shot and killed after he and four others from the Red Pheasant Cree Nation drove onto Stanley’s farm near Biggar, Sask., in August 2016.

An altercation occurred between the people in the SUV and Stanley and his son that ended in the fatal shooting.

A jury found Stanley, 56, not guilty of second-degree murder in February 2018, igniting a firestorm of debate in the weeks that followed.

One month after the verdict, the Civilian Review and Complaints Commission for the RCMP launched an investigation into whether the RCMP’s handling of the Stanley case was “reasonable.”

It also looked at whether RCMP members discriminated on the basis of race, after Boushie’s family made allegations about insensitive treatment and members were cleared of any wrongdoing by the force.

The review commission received RCMP Commissioner Brenda Lucki’s final response to its findings and recommendations on Jan. 29, and is now set to share its results in mid-March, according to the commission’s service standard.

Here’s a look back at the concerns that began the investigation, why it was delayed and what to expect from the long-awaited report.

In December 2016 — four months after the shooting — Boushie’s uncle, Alvin Baptiste, filed a complaint with the RCMP. Baptiste made five allegations about officers involved in the shooting investigation.

A superintendent for the RCMP’s Saskatchewan “F” Division wrote back 10 months later, saying he only partially supported one of Baptiste’s five claims.

Three of Baptiste’s concerns centred on the RCMP’s visit to the Red Pheasant reserve in August 2016, to inform the family of Boushie’s death.

Seven RCMP officers surrounded the home of Boushie’s mother, Debbie Baptiste, and another three officers went to the door to deliver the news of the death.

The officers were also acting on information that one of Boushie’s friends, Cassidy Cross-Whitstone, had fled the shooting scene, was inside a home resembling Debbie Baptiste’s and was potentially armed, according to the RCMP’s response.

Alvin Baptiste said the number of officers seemed out of the ordinary and insensitive.

“They just approached it like [the family] were the culprits of something, like they did something wrong,” Baptiste previously told CBC News.

According to the response the RCMP sent Baptiste, the fact that both tasks — the next-of-kin notification and the search — took place at the same location was “extremely unique in nature” but that it was “not possible to deal with both tasks separately.”

Alvin Baptiste’s complaint alleged that one of the officers told a grief-stricken Debbie Baptiste to “get it together” and asked if she had been drinking. He also alleged the family did not give permission for the RCMP members’ ensuing search of the home.

Debbie Baptiste and her other son, William Boushie, asserted the inappropriate remarks were made, while none of the RCMP members interviewed recalled the exchanges, wrote Mike Gibbs, the RCMP superintendent who responded to Alvin Baptiste.

Gibbs said the RCMP’s complaint investigation was thorough and involved interviewing family members and officers who were at the home that night.

One officer said the members were not able to answer questions about the active shooting investigation and that he could see “how their approach could have been perceived to be insensitive.”

“For this, the RCMP apologizes,” Gibbs wrote.

But given the “safety and tactical reasons” behind the visit, Gibbs said he supported both the number of officers and their approach to the next-of-kin notification.

While three family members did not recall giving the RCMP permission to search the home, two officers said permission was granted, Gibbs said.

“There was no definitive evidence other than the word of the witnesses and the police,” Gibbs wrote. “Based on the difference in the recollection of events … I am unable to support [the] allegation.”

Alvin Baptiste also expressed concern with the first RCMP media release about the shooting, which he said made Boushie look like a criminal, caused the family further upset and sowed racial discord in the province.

According to the release, five people — Boushie, Cross-Whitstone and three others, none of whom were named in the release — “entered onto private property by vehicle in the rural area and were confronted by property owners.”

Boushie was shot while “other occupants … were taken into custody as part of a related theft investigation,” the release said.

No one in the case was ultimately charged with theft.

Gail Davidson, a researcher with Lawyers’ Rights Watch Canada — a human rights-focused NGO that welcomed news of the CRCC’s investigation — said the RCMP’s initial framing of the incident was problematic.

“The RCMP treated it as though they were investigating an interrupted home invasion of very frightening proportions” by Indigenous youth, Davidson said.

Gibbs said the release was created in line with RCMP policy and approved by the force’s national communications unit and the officer in charge of major crimes.

“Regardless, I apologize if you felt the media release depicted [Colten] as a thief and caused your family further anguish, as that was never the intent,” Gibbs wrote.

Gibbs did partly support Alvin Baptiste’s fifth and final allegation. Baptiste said officers put one of Boushie’s female friends at risk when they rushed away from the scene in a police vehicle, without knowing the woman was in the back seat.

That was “not appropriate” and the officers received “operational guidance,” Gibbs wrote.

Alvin Baptiste was dissatisfied with the RCMP’s response and called on the Civilian Review and Complaints Commission to review how the force handled his complaint.

The commission — an independent, civilian-run agency — agreed but went one step further.

The commission also announced its own “public interest investigation” into the conduct of RCMP members, including whether their investigation of Boushie’s shooting was “reasonable” and in line with RCMP training. The commission also set its focus on whether any officers’ actions “amounted to discrimination on the basis of race or perceived race” and whether RCMP training in itself was reasonable.

“The [CRCC’s] chairperson was aware of the allegations made by the family but also had additional concerns that he wanted investigated,” said Kate McDerby, a commission spokesperson.

Lawyers’ Rights Watch’s Davidson said Stanley’s trial revealed a number of concerns about the shooting investigation. That includes the fact the SUV Boushie was in went uncovered, and rain washed away blood and other evidence.

Cpl. Terry Heroux, the forensic identification specialist at the Boushie shooting scene, testified during the trial that the scene “regrettably” went unprotected. Officers waited longer than expected for a warrant needed to continue their crime scene examination once Boushie’s body was removed, Heroux said.

“I was under the impression that the warrant was [coming] forthwith … and I had totally anticipated being back to the scene within a couple hours. It ended up not being the case,” Heroux said.

Officers “didn’t find any identifiable fingerprints on anything for the entire case,” he added.

The jury also heard that the RCMP blood spatter specialist assigned to the case did not visit the shooting scene. Instead, after consulting Heroux, Sgt. Jen Barnes examined crime scene photos from her office in Alberta.

Barnes defended the decision in the witness box.

“There was no issue with the position of the deceased,” she said. “And therefore, there was nothing that I could determine that would add any further information to the investigation.”

The commission began its review in March 2018. Since then, the chairperson who launched the Boushie investigation, Guy Bujold, was replaced in January 2019 by Michelaine Lahaie.

According to documents previously obtained by CBC News, the commission’s work was held up in part by the “RCMP’s delays in responding to and delivering relevant materials.”

The CRCC re-interviewed some of the witnesses originally interviewed by the RCMP and shared its findings — including recommendations on how to improve the police force — with the RCMP in December 2019 and January 2020, said McDerby, the commission’s spokesperson.

The RCMP, which is not bound by any legislated timeline, responded in January 2021.

Brian Sauve, the president of the National Police Federation — the union that represents RCMP members — said while the case is complex, the delay is unacceptable for everyone involved.

“Three years of families of victims, affected persons, as well as members of the RCMP who have been waiting for the ability to have some closure on this file — I think that’s not appropriate in today’s day and age, whether it’s an RCMP resource roadblock or a CRCC resource roadblock,” Sauve said.

The RCMP has previously said any of the findings could have far-reaching implications for the force.

“As a result, there are many factors that need to be considered before preparing a response,” said spokesperson Cpl. Caroline Duval. “These include existing case law, our legal authorities, our budget and potential impacts on our service to the public, among others.”

What to expect in the report

The review commission’s final report will first go to Alvin Baptiste, the Boushie family and the RCMP members involved in the complaint, before being shared with the wider public.

The report will outline the commission’s recommendations — which are not legally binding — and which suggestions the RCMP accepts. If RCMP Commissioner Brenda Lucki does not accept some recommendations, her reasons will be outlined too.

One change to Saskatchewan RCMP operations has already been disclosed.

The RCMP union’s Sauve said he has no doubt officers “did a professional and dedicated job with the resources that they had available to them.”

“However, if the [commission] finds that they need better training, perhaps more dedicated resources, that speaks to continuous improvement in the RCMP and that’s a good thing,” he said.

Debbie Baptiste said in a statement Wednesday that she wants RCMP members to wear body cameras “[so] that they can’t be turned off at the moment of a response.”

“There is no justice and the list of our #MMIWM still climbs with no closure for families, while the murderers walk and get to sit with their families and eat dinner,” she said.