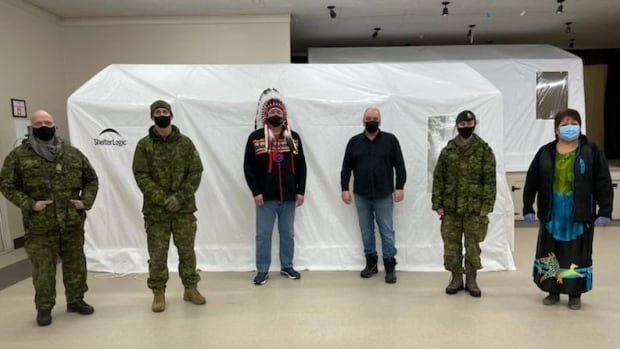 Members of the Canadian Armed Forces are now on the ground in Pimicikamak, helping the remote northern First Nation battle an outbreak of COVID-19.

They’ve also been checking in on elders and other vulnerable community members to see how their health is, she said.

Robinson said the help is much appreciated by the community and the First Nation’s pandemic response team, who were exhausted and overwhelmed by trying to cope with the outbreak in the community of about 8,000 people, which is about 530 kilometres north of Winnipeg.

“We wanted to keep going, but it was so difficult, with growing numbers daily and everyone fearing at the same time,” she told CBC News Network host Heather Hiscox Thursday morning.

They’ve had 291 cases in total so far, with many of them children, Robinson said.

About 25 members of the military are supposed to be there for about two weeks, Chief David Monias said earlier this week.

This is the fifth time members of the Canadian Armed Forces had to be sent to an Indigenous community in Manitoba to help with a COVID-19 outbreak.

Earlier this month, the military was sent to Pauingassi First Nation to provide humanitarian aid. The fly-in community of 500 people, just over 280 kilometres northeast of Winnipeg, had 145 known active cases when the army arrived.